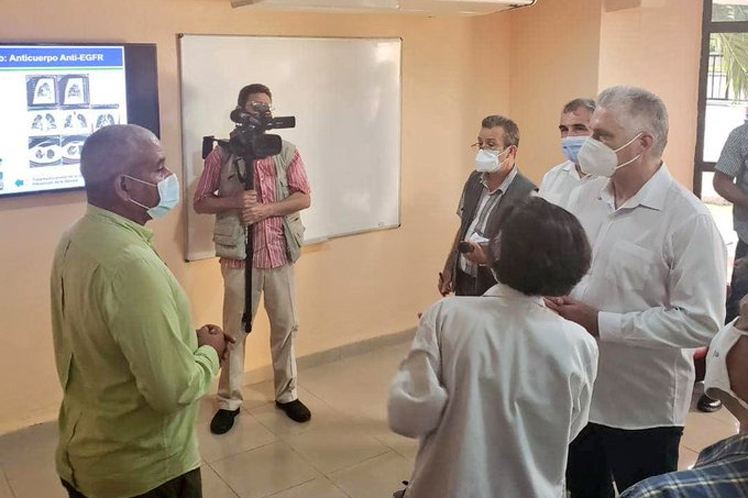 The president visited the Center for Molecular Immunology (CMI), where several drugs used in the treatment protocols against the disease are produced, such as monoclonal antibodies Itolizumab and Nimotuzumab, the Presidency’s Twitter account reported.

CMI is also accounted for antigens demanded by vaccine candidates of Soberana series, developed by the Finlay Vaccine Institute.

In addition, they process there between 400 and 500 samples daily for the detection of SARS-CoV-2 virus, which causes the disease, using polymerase chain reaction (PCR) tests.

Earlier, the head of state checked the operation of a vaccination center located in Romerillo neighborhood, west of the city, where he shared with neighbors about the immunization process and the need to continue protecting themselves not to get infected.

In early hours of the morning, the president also spoke with workers of the Electric Power Plant Maintenance Company in Havana, who work for the stability of the country’s electricity system.

In the exchange, Díaz-Canel highlighted the courage and effort made in these functions, in particular for the total dedication with which they devoted themselves to solving problems that some generating plants presented in recent days, which allowed them to return to operation in record time.

In that entity, the president participated in the commemorative act for July 26, date on which Cubans remember the assaults on Moncada and Carlos Manuel de Céspedes barracks, carried out in 1953 by a group of young people led by Fidel Castro.

Cuban President thanks Operation Walk for its work

Cuban President thanks Operation Walk for its work