Visitors of Pig Island, Bahamas, are required to protect animals 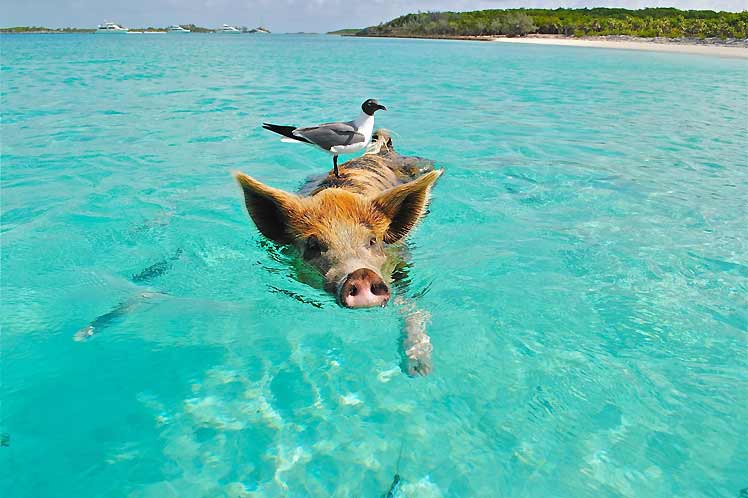 Visitors of Pig Island, Bahamas, are required to protect animals

Big Major key, located in the Exuma district of the Bahamas, stands out as one of the most curious Caribbean and international tourist destinations, thanks to its paradisiacal beaches and friendly inhabitants, accustomed to walk freely on the sand or among the waves of the sea.
Share on facebook
Share on twitter
Share on whatsapp
Share on telegram
Share on email

Goats, chickens and cats live on the island; however, a group of wild pigs mostly play the role of hosts, as thousands of people have visited the place motivated by the desire to take selfies bathing or petting them.

The national government disclosed in early 2017 the death of seven of these animals as a result of intoxication with beer and rum, for which it quickly dictated the necessary measures to keep them safe.

‘People will be able to take pictures and watch the pigs swim; never feed them.’ The then Minister of Agriculture, Alfred Gray, established, and the authorities in charge of the control of the regulation later ruled out repetitions of such incidents.

Bahamas, with almost 400 000 citizens living on 24 of its more than 700 islands, keys and islets alone, has a special charm because of its natural beauty, appreciated by those who cross the waters from the North Atlantic Ocean to the Caribbean or vice versa.

The stories of this strategic point in the commercial routes, hideout of pirates, buccaneers and filibusters from the end of the XV century to the XVIII century, impacted travelers, including those about the arrival of the pigs as companions of some sailors.

The purpose of the sailors was to use them as food, but they died for unknown reasons and the animals fed, at least initially, on the leftovers of the boat, got used to the hot sun and made the key their home, according to reports.

A second version stated that they survived a shipwreck and swam to shore. Another theory suggested a possible transfer from a nearby islet, while suspicious scholars consider that they are part of a marketing plan to attract tourism.

That sector accounts for 60 percent of the economy of the Bahamas, whose Big Major Key is more popularly known as Pig Beach.