Puebla Group will present a Solidarity Model of Development 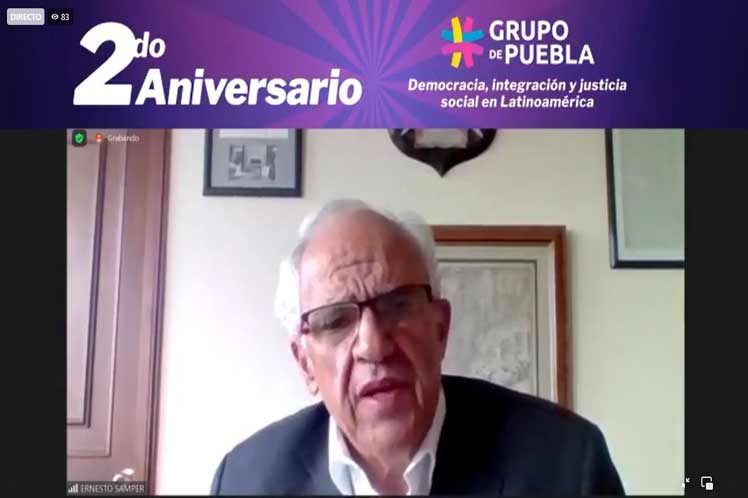 Puebla Group will present a Solidarity Model of Development

In welcoming those present at this virtual conference, the former Chilean presidential candidate Marco Enríquez-Ominami and founding member of the alliance, took stock of everything promoted by the Group in these times, since the elections in Bolivia with the triumph of Luis Arce to Pedro Castillo’s victory in Peru, which today gives more strength to progressivism, he said.

‘Right-wing values ​​are falling back and humanist values ​​are advancing. After so much harassment, we are regaining confidence in the region,’ Ominami said. After touching on several points, former Colombian President Ernesto Samper stressed that the Group is made up of citizens who met in Puebla, where liberation theology was born, to build a progressive agenda. ‘We are not parties, NGOs, or states, we are people who want to contribute to the construction of a progressive agenda’, he pointed out.

Making a quick balance, he recalled that during this time they fought for peace process in Colombia, for the Palestinian cause, against the judicial wars woven in the region and expressed their total rejection to economic, commercial and financial blockades and unilateral measures, imposed by the United States, especially regarding Cuba.

To celebrate this second year of life, the alliance founded in July 2019, summoned all its members and those who most recently have joined this project, to consolidate a great regional space.

Characterized by its defense of democracy, self-determination of the peoples, during the Summit, will be presented a Solidarity Development System to overcome inequality and the effects of Covid-19, which has caused a strong negative impact on Latin America, Caribbean and Spain.