Formulas against Cuba to incite hatred 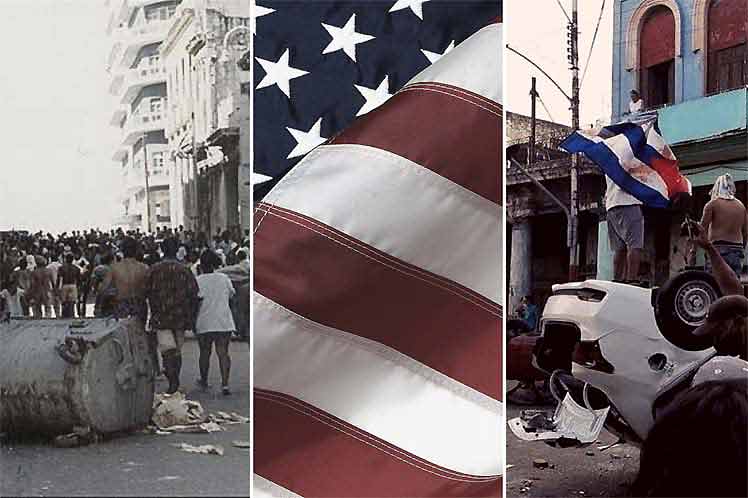 Formulas against Cuba to incite hatred

Historian Fabio Fernandez told Prensa Latina that there are common denominators between both events that broke out amid a scenario of economic crisis, a blockade tightened by the United States, a tense social situation, a media campaign and the incitement to violence.

Some studies indicate that after the collapse of the socialist bloc and the Soviet Union (1991), Cuba lost access to a market that provided fuel, food, medicines and other indispensable elements.

In this regard, 1993 and 1994 were the worst years of the economic crisis in Cuba during the so-called Special Period.

‘We have to understand that amid this, the United States further tightened the rope to cause the collapse of the Cuban political and social system, that is why it tightened the blockade,’ Fernandez commented.

In fact, in 1992, the US Senate passed the Torricelli Act, known as the Cuban Democracy Act, to restrict the entrance of foreign ships to Cuba and prevent commercial transactions between US subsidiaries and Cuba.

This was reinforced by an anti-Cuba campaign carried out by the most conservative far-right groups, based in the state of Florida, which promoted illegal departures from Cuba by hijacking boats.

Days before August 5, 1994, small vessels were hijacked in the capital and, in particular, an incident with a tugboat taken from the bay of Havana as a result of which more than 30 people.

In an interview with Spanish reporter Ignacio Ramonet, the historic leader of the Cuban Revolution, Fidel Castro, said that this event was distorted by the US press as part of a media campaign against the Revolution.

By 1994, the US had not complied its migration agreement of granting 20,000 annual visas (it granted about 1,000 every year), and enforced the Cuban Adjustment Act to favor those who arrived in the US illegally.

On August 5, 1994, dozens of people gathered because the so-called Radio Marti, based in the US, had announced that hundreds of motorboats would leave to fetch them, but that never happened.

‘The riots and acts of vandalism that were perpetrated that day were propelled by neglected sectors on whom the work of the Revolution had not had the same impact, and there were still visible elements of marginalization,’ the historian explained.

Fernandez highlighted Fidel Castro’s leadership when facing the situation, he decided to walk among the crowd unarmed, and his order was that no one fired.

‘Many people say that his magnetism appeased the demonstrators, who ended up chanting revolutionary slogans, which must be linked to the historic prominence of this figure and the consensus of the majority regarding our social project,’ he added.

After these events, the Cuban borders were opened, so the third migration crisis with the US since 1959 followed.

Moreover, ‘mechanisms of democratic participation were reinforced, dialogue with the people increased and other measures to improve elements of the everyday life were taken,’ the historian said.

On July 11, 2021, there were riots in the country with acts of vandalism and public disorder that broke out amid an economic crisis and a complex international health situation.

‘I think that an important difference is the social media factor as a mechanism that multiplies the sources of protest and as a platform to create these riots,’ Fernandez pointed out.

According to the historian, this type of communication on the Internet allows spreading fake news, since ‘the diversity of information flows is now much higher than in 1994, so is the articulation of counter-revolutionary contents in a campaign.’

About this topic, a number of experts agree that the US has implemented a soft coup script regarding its Cuba policy and thus uses opinion leaders, slogans and labels, fake accounts on social media, the manipulation of reality and the incitement to hatred.

Furthermore, Washington has tightened the blockade against Cuba in the last few years by adopting 243 additional measures, 55 of which were enacted during the Covid-19 pandemic.

On the other hand, ‘the response from the revolutionary government was similar to that of the August 5, 1994, since on July 11, 2021, President Miguel Diaz-Canel went to San Antonio de los Baños (western Cuba) to face the situation there,’ Fernandez commented.

After that, the Cuban president spoke on national television to explain the situation in the country and its problems to the Cuban people. He denounced the media campaigns, urged to strengthen dialogue, called for peace and unity of all Cubans.

According to the historian, the most important thing is that these events did not cause a governance crisis or resulted in violent repressions that some US media outlets claim.

Anyway, Fernandez urged to stay vigilant, reinforce the mechanisms of dialogue with the new generations, revitalize the institutions in charge of promoting the construction of socialism and implement public policies on which the revolutionary work has not had an impact with the same intensity in order to build a Cuba for all.