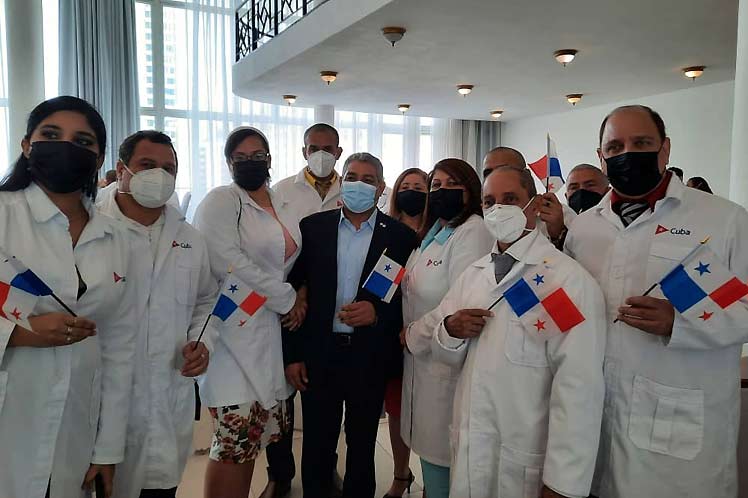 ‘If we had not had the support of the entire brigade (231 members) that came then, Panama’s history during the pandemic might have been very different,’ said the minister said, who acknowledged these professionals’ solidarity ‘with the peoples that need them.’

On talking to reporters, Sucre thanked ‘the Cuban people for all the support given to Panama through difficult days, as well as during the second Covid-19 wave’, and praised the ‘valuable participation and professional care’ in their work in the country.

The minister also sent a message in which he noted that ‘there are no words to thank all the support that we have received from the Cuban people through their health professionals; we, the Panamanian people, the National Government and the President of the Republic (Laurentino Cortizo), are utterly grateful.’

For his part, the head of the Henry Reeve Contingent, Hector Perez, said at the farewell ceremony that ‘they are waiting for us in Cuba; we only came for three months, but, due to the Covid-19 tension in Panama, we worked in different hospitals in Panama Metro and Panama Oeste (west) for eight months, but the time to leave has come.’

He spoke about the experience of some members of the Cuban contingent, who had worked amid other epidemic emergencies and natural disasters, for example, the Himalaya earthquake in April 2015, the Ebola outbreak in West Africa in March 2014, and in a number of countries fighting Covid-19.

On December 24, 2020, 231 Cuban health experts arrived in Panama. Some of them returned to Cuba in March, another group in July, and those who were still working in Panamanian hospitals will return on Thursday.