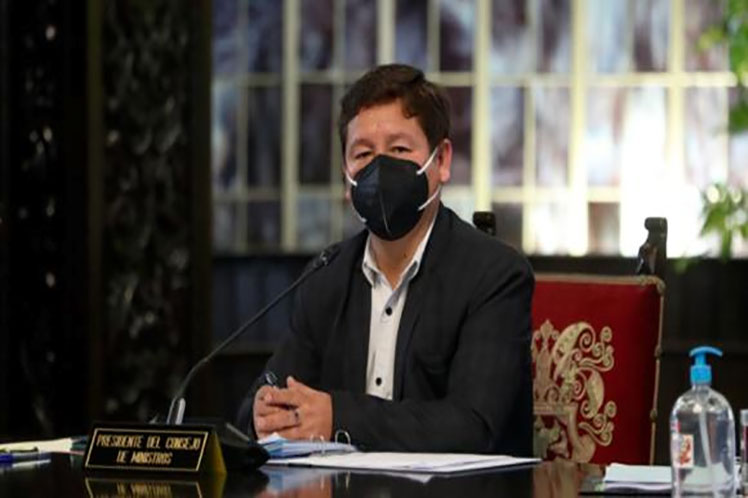 Lima, Aug 5 (Prensa Latina) The Prime Minister of Peru, Guido Bellido, has reiterated his call to dialogue, in contrast to the harsh stance of the extreme opposition that, according to one of his leaders, calls for a purge of ministers who are supposedly communists.
Share on facebook
Share on twitter
Share on whatsapp
Share on telegram
Share on email

‘We are going to guarantee a government for everyone, one that comes from minorities and is for everyone,’ Bellido said in an interview published on the Internet.

According to the head of the Council of Ministers, cohesion is required, reconciliation after two centuries of independence but ‘a Peru that has everything and another that has nothing; a forgotten and discriminated Peru and another that had all authority.’

The new government of President Pedro Castillo, he pointed out, comes from the minorities but has a clear openness to dialogue and capacities to face the needs of the country and develop ‘a very dialoguing administration, a broad-based government.’

His position contrasted with those of the parliamentary benches of the Fuerza Popular (FP) and Renovación Popular (RP) parties, which refused to dialogue with Bellido in a round of talks aimed at establishing dialogue as a form of relationship between the Government and the opposition, according to the official.

Despite this opening, the spokesperson for RP, Jorge Montoya, and that of FP, Hernando Guerra García, refused to talk with Bellido and rather demanded his retirement from the position because in an interview three months ago he refused to qualify the members of armed groups from decades past as terrorists.

Montoya said that ‘We have to clean up the cabinet, give the population another face and make them understand that this is a democratic country, not a communist one,’ and agreed with Guerra in demanding the departure of Bellido and five other ministers, despite the fact that the appointments are unsder the authority of President Castillo.

The FP representative, in turn, argued that his bench will not dialogue and that the ministerial cabinet is ‘a failed cabinet.’

RP and FP also want the new government to renounce the decision to promote a new constitution through a constituent assembly to replace the current neoliberal one.

The prime minister said in this regard that the government respects the rule of law and institutions and is proposing a new constitution to have another in line with the times and the development of the economy.

Regarding private investments, he pointed out that they are welcome, on the condition they are not ‘a channel of corruption to in detriment of the public purse’ and of national development.