Cuban youngsters pay tribute to Fidel Castro at his birthplace 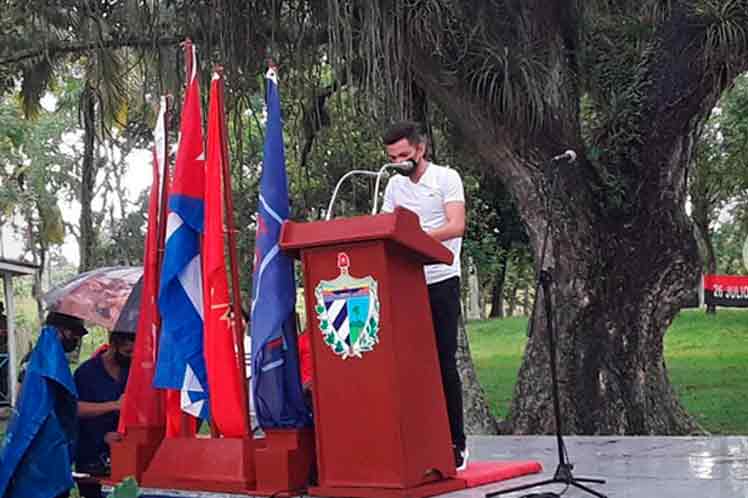 Cuban youngsters pay tribute to Fidel Castro at his birthplace

Holguin, Cuba, Aug 13 (Prensa Latina) Cuban youngsters from Holguin went on Friday to the birthplace of Commander in Chief Fidel Castro, in the eastern town of Biran, to sing and pay tribute to the intense life of the historic leader of the Cuban Revolution.

Under the branches of the centenary carob tree – custodian of the large house built on Caguairan soil,and witness of stories and pranks of little Fidel – those gathered there paid tribute on his 95th birth anniversary to the man who worked until his last days in favor of social justice and equality.

Maria Alejandra Muñoz, a high school student, with a strong and clear voice ratified that the continuity of the Cuban Revolution is assured because ‘we do not cease in our efforts to keep the flag of the Star of Solidarity high.’

In the place, declared a National Monument, she also recalled Fidel’s leadership capacity, his imprint on the Latin American left wing, as well as his interest in preparing the new generations and the importance of solidarity with other peoples.

Meanwhile, Yanet Hernandez, member of the Provincial Bureau of the Communist Youth League, in the presence of the highest political and governmental authorities of Holguin province, attached importance to going every August 13 to that site, where ‘we can be closer to the eternal Fidel Castro.’

She pointed out that Holguin’s youngsters are committed to the fight against Covid-19, which is proven in the hundreds of students and volunteer workers in hospitals, as well as in other essential productive tasks of the province.

Likewise, she highlighted the commitment to contribute more from the study, work and defense of the Homeland to the updating of the Cuban economic model and the social development promoted by the Commander in Chief.

The Historic Complex of Biran, about 71 kilometers from the capital city of Holguin, is made up of 11 facilities, among them the replica of the central mansion – destroyed by fire in 1954 – the post office, the little school, the small store, the bar La Paloma, the hotel and the cockfighting fence.