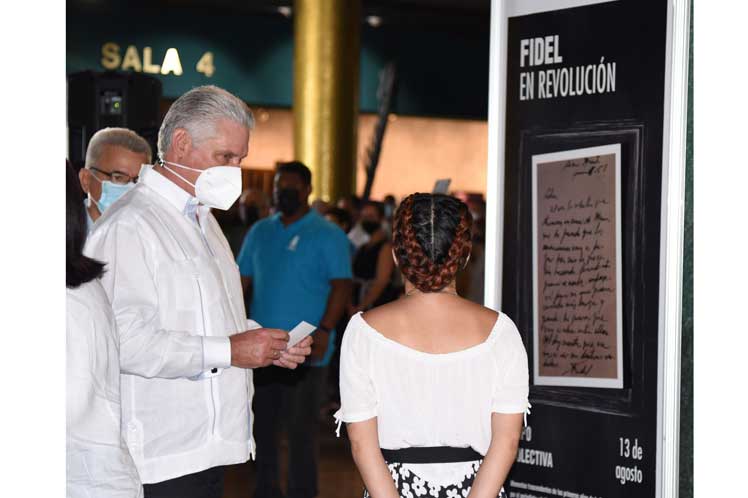 Havana, (Prensa Latina) Starting on Friday, the Jose Marti Memorial in Havana, Cuba, is hosting the collective exhibition 'Fidel in Revolution', which shows major moments after triumph in 1959, which were captured by Russian journalist and photographer Nicolai Chiguir.

Inaugurated in the presence of Cuban President Miguel Diaz-Canel Bermudez and other top leaders, the exhibition brings together photos taken by the first correspondent of the Soviet Union’s TASS news agency in Cuba, as well as by Prensa Latina and Alberto Korda’s studio.

Historian Rene Gonzalez Barrios recognized that the Soviet journalist, who was in love with the Cuban Revolution and was a correspondent in two different periods, lived the intensity of those early years together with youths and countryside people.

‘The Soviet people had named this territory as the Island of Liberty and idealized and admired Fidel as a symbol of universal justice. I think this exhibition is a tribute worthy of recognition to that brotherhood and friendship,’ he said.

Chiguir compiled, in addition to his own photos, pictures major main media and professionals close to those events, and collected 73 paintings, exhibited for the first time in 2009, on the 50th anniversary of the Revolution, in Moscow, the capital of Russia, and given as a donation a year later by the journalist’s daughter.

‘From that selection, there are only 31 paintings here, the most related to the historic ties between the USSR and the Commander-in-Chief, including the welcome to cosmonaut Yuri Gagarin at the José Martí International Airport in Havana,’ the academic said.

Some events collected by Nicolás were the visit of Fidel Castro to students in a boarding school in Paya Giron, in 1960; the Second Declaration of Havana on the Revolution Square, in 1962; his meeting with Soviet friends in the 1970s and a reception at Soviet Embassy.

‘When many countries in the world turned their backs on us and the United States established the economic, commercial and financial blockade, the friendly hand of the Soviets appeared with economic aid, advice, and even the weapons with which we defended the country’, Gonzalez Barrios noted.