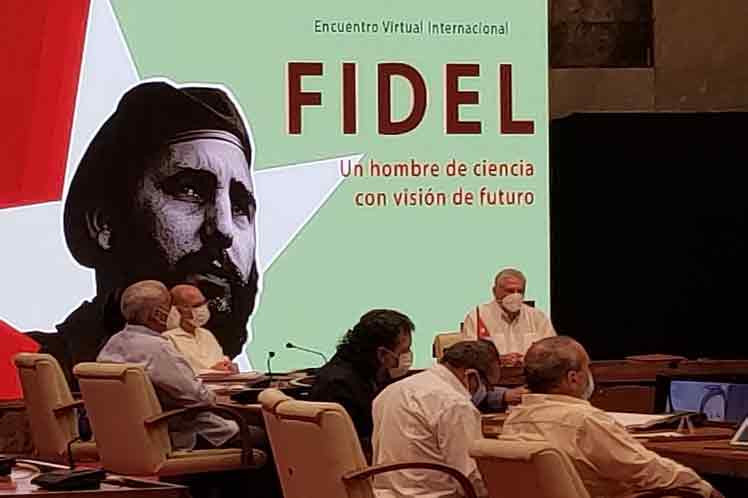 The president spoke at the International Virtual Forum ‘Fidel, a Man of Science with a Vision of the Future,’ arranged by the Sao Paulo Forum and the Communist Party of Cuba, with the participation of political leaders, intellectuals and Venezuelan President Nicolas Maduro, among others.

Diaz-Canel noted that the unity advocated by Fidel Castro was what made the Cuban Revolution and other revolutionary processes triumph, in which ‘the capacity to defeat the most powerful empire’ was demonstrated.

The also First Secretary of the PCC acknowledged the Cuban historic leader’s contribution to the country’s efforts to achieve technological and scientific sovereignty.

Under that purpose –the president recalled- Cuba was filled with healthcare centers, scientists and schools, in spite of what he described as the ‘obstinate, unfair and genocidal US blockade,’ the greatest obstacle to the development of the country.

Diaz-Canel said that under such circumstances, aggravated by the Covid-19 pandemic, the new human being defined by Che Guevara lives and works in Cuba.

‘I have seen that human being working in the care of the sick between the hope of vaccines and the uncertainty of the new strains,’ the president expressed.

The head of State pointed out such attitudes reflect Fidel Castro’s thought of placing the human being above profits.

Diaz-Canel reiterated the denunciations on the US government’s aggressions faced by his country. In that sense, the president thanked for the support and solidarity, particularly in the Latin American and Caribbean region to defeat anti-Cuban maneuvers within the Organization of American States.

‘We will not allow ourselves to be robbed of the concepts of democracy, freedom and human rights that we inherited from Fidel,’ he said.

Diaz-Canel added that neither will there be aggressions or pressures able to divert Cuba from its efforts to build a prosperous and sustainable socialist model.

The First Secretary of the Communist Party of Cuba reaffirmed in his speech the support to progressive regional governments that face the US hostility amid the fight against Covid-19 and against the aftermath of ‘savage neoliberalism.’