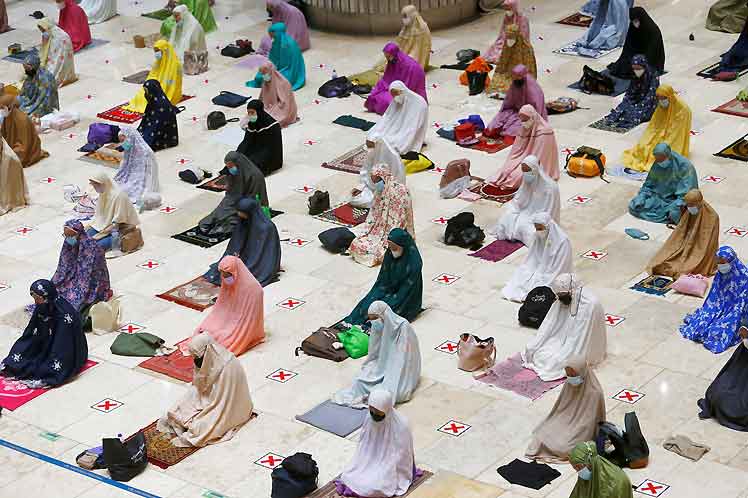 On its own, Islam and its Sunni, Shiite, Alawite, Wahhabite and Druze variants, among others, have a wide variety of ceremonies that are observed according to the corresponding lunar calendar.

For Muslims, Ramadan (a month of daytime fasting), Hajj and Umrah (an annual pilgrimage and a year-round pilgrimage to holy sites in Saudi Arabia) and, for example, Ashura and Arbain are obligatory.

Ramadan ends with Eid al-Fitr, which begins with the recitation of a specific prayer, after which participants greet each other and wish each other happiness. Everyone wears new clothes made for the occasion because the custom demands that they look their best.

The day is spent with family and friends at banquets and gifts are exchanged.

At the end of the Hajj, the Day of Sacrifice is celebrated, which recalls the episode recorded in the Koran -the holy book of this religion-, during which it is narrated how Abraham proved his loyalty to God. He was to offer his son Ishmael (in the Bible it is Isaac) as an act of divine obedience, but at the last minute the Almighty intervened and prevented the death of the human being by providing him with a lamb to carry out the order.

Ashura, the tenth day of the month of Muharram in the Islamic lunar calendar, marks the martyrdom mourning of Hussein ibn Ali, grandson of the Prophet Muhammad and killed in the midst of an unequal battle in Karbala, a city in present-day Iraq, in 680.

The Shiites mourn and fast to honor the man they consider the direct heir of the founder of Islam and whom they consider to have been stripped of the office of caliph that belonged to him by his lineage.

In some places, the most fervent ones self-flagellate until blood gushes, as a sign of their fidelity to the late religious ruler, although today others donate the vital liquid for a more profitable mission.

This year, Ashura will take place from August 18 to 19 and at its conclusion Arbain will begin, that is to say, 40 days of mourning.

Throughout the centuries, the custom continues to remember those who are valued as heroes of the resistance because, in their conception, they died in defense of the truth.

According to this line, Hussein sacrificed his life to revive the Islam that Yazid, who undeservedly occupied the caliphate, had demeaned with sinful attitudes.

Since the Karbala massacre, when the grandson of Mohammed – accompanied only by 72 followers – faced an army of 30,000 soldiers, the Muslim world was divided in two and then in more; but the fundamental currents, Sunni and Shiite, are the predominant ones today.