Merkel closes her Russian agenda shortly before ending her term 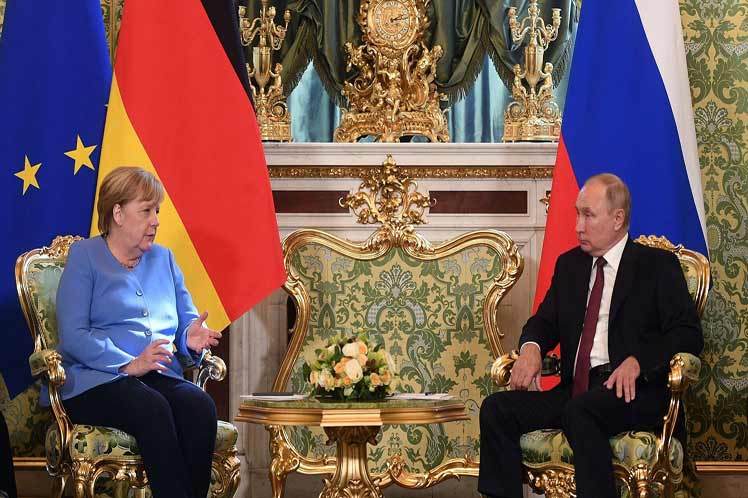 Merkel closes her Russian agenda shortly before ending her term

Moscow, Aug 20 (Prensa Latina) Germany's Chancellor Angela Merkel returned to her country after a busy agenda of talks with Russia's President Vladimir Putin, a few weeks before the end of her term at the head of her nation.

After talks lasting almost three hours, the leaders shared with the press, at which time Putin stated that Merkel will always be welcome in Russia, even after the end of her term, following the upcoming parliamentary elections.

Putin and Merkel discussed issues on the bilateral and regional agenda, including the situation in Afghanistan, Ukraine, Libya and Syria, relations with Belarus and issues related to the treatment of civil society.

Russia’s head of State noted that the negotiations with Merkel ‘traditionally took place in a constructive and working environment,’ TASS news agency emphasized.

Putin explained that the sides discussed ‘in detail, including with the participation of delegations, the state and prospects for the development of Russian-German relations, we exchanged views on a wide range of issues,’ he commented.

The president highlighted that ‘it can only cause respect’ that Merkel has headed the German government for 16 years.

He underscored that she has ‘confidently led one of the largest and leading countries in Europe and is rightly among the most authoritative European and world leaders.’

Among the points of the meeting, he said that Moscow and Berlin hope that after the formation of a new government in Iran, efforts to preserve the Joint Comprehensive Plan of Action (JCPOA) on Iran’s nuclear program will continue.

Another question from the press was about the German request for the release of Alexei Navalny, on which Putin replied that the Russian oppositionist was not convicted for his political activity, but for a crime against foreign partners.

‘No one should hide behind political activities for the implementation of business projects, especially in violation of the law,’ the president indicated.

The head of State noted that the Russian authorities are determined to ‘do everything to make the situation in Russia stable and predictable,’ Sputnik news agency reported.