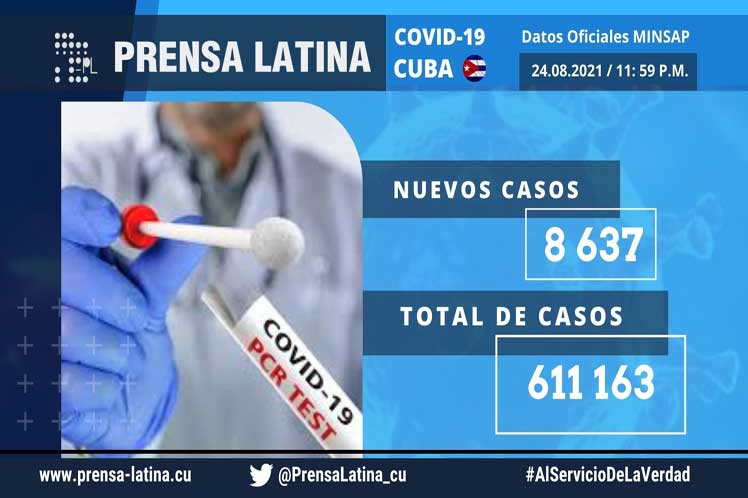 Havana, Aug 25 (Prensa Latina) With 92 deaths due to complications caused by Covid-19 and 8,637 new cases reported on Wednesday with the SARS-CoV-2 coronavirus, which causes the pandemic, Cuba shows an unfavorable situation.

This was confirmed by National Director of Epidemiology, Dr. Francisco Duran, who, at his daily morning briefing on television, lamented that many of the dead in the past few hours were relatively young, including a two-month-old baby.

He stressed that, although the number of new cases is 1,270 less than that reported on Tuesday, this does not means that the country will recover any time soon, because the virus has spread across the nation, and some western, eastern and central provinces have reported more than 1,000 cases per day.

Dr. Duran insisted that parents must increase the care of children and teenagers because 1,901 cases of people under 20 (1798 of which are children) were reported.

He reiterated that the new coronavirus variants spread in the country, such as the Delta one, have accelerated the transition of patients to complicated states; 145 patients are in a critical state and 324 in a serious one.

The highest numbers of coronavirus cases have been reported in August, with 216,820 positive cases and 1,961 deaths in just 24 days, the epidemiologist said.