Panel in Canada calls for an end to U.S. hostility against Cuba 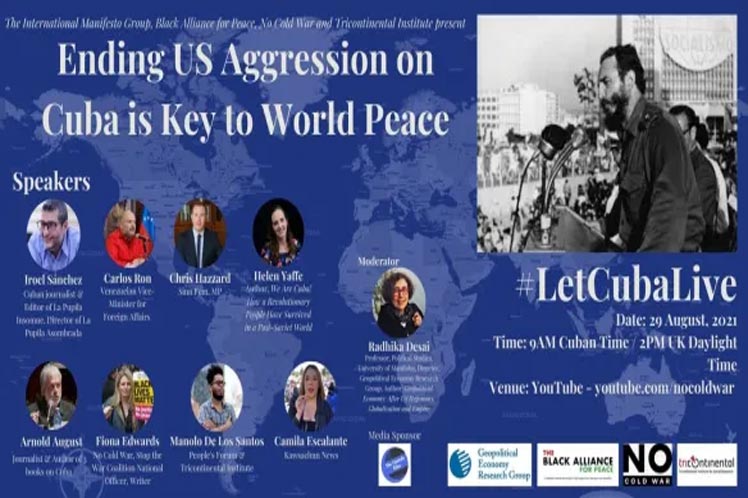 Panel in Canada calls for an end to U.S. hostility against Cuba

Co-sponsored also by the Canada-based International Manifesto Group (IMG), the virtual event will address the scenario of tightening of the economic, commercial and financial blockade against the island by the administration of Donald Trump (2017-2021) that adopted 243 coercive measures, unfortunately in force in the current administration of Joe Biden.

These unilateral actions are a threat, not only to Cuba, but also to world peace, they constitute the attempt of a single country to impose its policies on the international system, they expressed in a note sent to Prensa Latina.

The United States is defying the overwhelming majority of the global community that is calling for the lifting of that siege on the Cuban people, they said after recalling that last June 23 at the UN General Assembly 184 nations out of the 192 that make up the multilateral organization voted to eliminate that policy of asphyxiation imposed almost six decades ago.

It is evident -they stressed- that the objective is to increase the difficulties of the Cuban people in an attempt to provoke a ‘colored’ counterrevolution.

They emphasized that the attack against the Cuban people comes at a time when forces seeking social progress within national independence and economic development are strengthening throughout Latin America, as witnessed by the recent elections in Bolivia and Peru.

Moreover, when there are signs of the United States’ inability to overthrow the Bolivarian government of Venezuela and in Brazil, Luiz Inácio Lula da Silva is ahead of President Jair Bolsonaro in the polls for the 2022 elections, they added.

By punishing the Cuban people, the United States clearly intends to send a threatening message, that is why all those who defend national independence, social justice and equity, in favor of a multilateral world and in opposition to the unilateral dictates of a single country, are living a crucial moment, they warned.

It is necessary to join voices against the unilateral policy of the United States towards Cuba, they concluded.

The meeting will be broadcast live on No Cold War’s YouTube channel (youtube.com/nocoldwar).