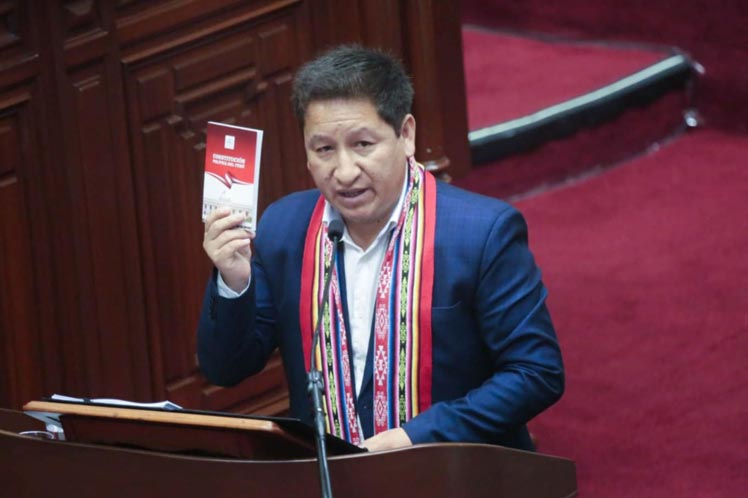 That was the symbolic beginning of the presentation of the Ministerial Cabinet in order to obtain the approval of the opposition majority plenary, without which all ministers would have to resign.

The president of the Congress of the Republic, Maria del Carmen Alva, asked Bellido, as they had previously agreed, to translate into Spanish what he had said in Andean languages because she did not understand either.

Bellido continued speaking in Quechua and, showing the Constitution, recalled it recognizes Aymara and Quechua as official languages although they are not taught in schools, and intercultural education is still precarious.

The PM explained that his aim was to show that many have not understood there are many peoples with their own culture and language in Peru, who are not understood, and began his dissertation in which he included several paragraphs in Quechua.

Bellido arrived on time at the seat of the unicameral parliament, along with the heads of the 18 portfolios, and the group walked four blocks from the Government Palace, at whose door they were seen off, one by one, by President Pedro Castillo.

The walk was carried out amid cheers from citizens who support the popularly-rooted executive installed on July 28th, and harassed previous they took office by a political and media campaign that became stronger after that date.

The Ministerial Cabinet arrived strengthened by the President’s decision to reject right-wing pressures that conditioned its support to the vote of confidence, without which all ministers would have to resign.

The session started with a delay of about an hour, while in front of the legislative palace groups of demonstrators, mostly from progressive parties and the ruling Peru Libre, expressed their support to the ministerial team.

At the same time, a smaller group of belligerent right-wingers shouted slogans in support of the opposition parliament and anti-communist slogans and clamored for the parliamentary impeachment of President Castillo.

The demonstrators remained in place since yesterday and the rivalry gave rise to some riots, which were controlled by the Police, without major consequences.