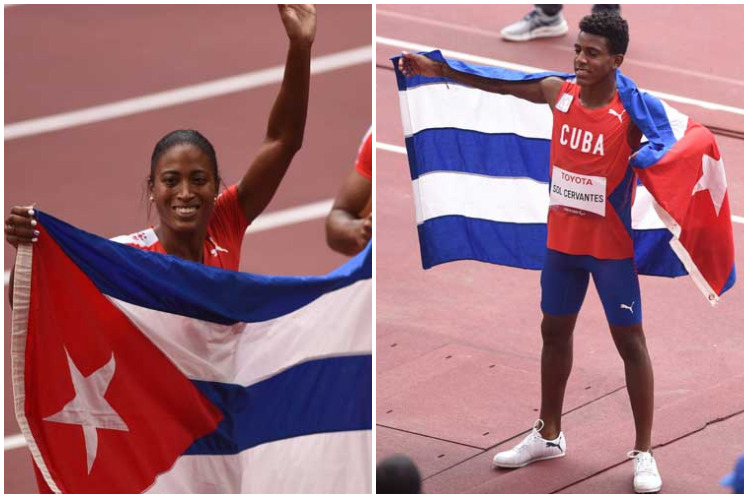 The golds corresponded to Robiel Yankiel Sol, in the long jump, category T47; and sprinter Omara Durand, who won her sixth crown in the history of Paralympics, by winning the final of 400 meters, category T12, visually impaired.

Sol surprised with a first stretch of 7.46 meters, a Paralympic record in a test for athletes who have limited movement of an arm of a low to moderate degree or the absence of limbs, and from that moment he upset all his rivals who were unable to beat the Cuban, only 18 years old.

The winner beat the 7.41 meter jump of Roderick Townsend (US), established on September 14, 2016 at 2016 Paralympic Games in Rio de Janeiro.

This Tuesday, the Cuban was followed by Townsend with a personal best mark of 7.43; and the representative of the Russian Olympic Committee Nikita Kotukov, bronze (7.34).

Later on, Durand, with her guide Yunior Kindelán, reclaimed the crown of 400 meters (T12) by setting a time of 52.58 seconds, her best during the season, to push back Ukrainian Oksana Boturchuk, silver (55.33) and Venezuelan Alejandra Paola Pérez, bronze (57.06), and Greilyz Greim Villarroel, fourth (57.69).

The 29-year-old athlete, undefeated since 2011, will try to expand her wins in the Japanese competition when she participates in the 100 and 200 meters races, distances in which she is a world record holder.

In other results of Cuba, shooter Yenigladys Suárez, Parapan American champion in Lima 2019 and debutant in Paralympic competitions, finished 15th in air pistol at 10 meters.

In addition, Paralympic swimming champion Lorenzo Peréz did not qualify for the final of 50 meters freestyle for categories S6-S7 and cyclist Damián López finished 10th in category C1 time trial.