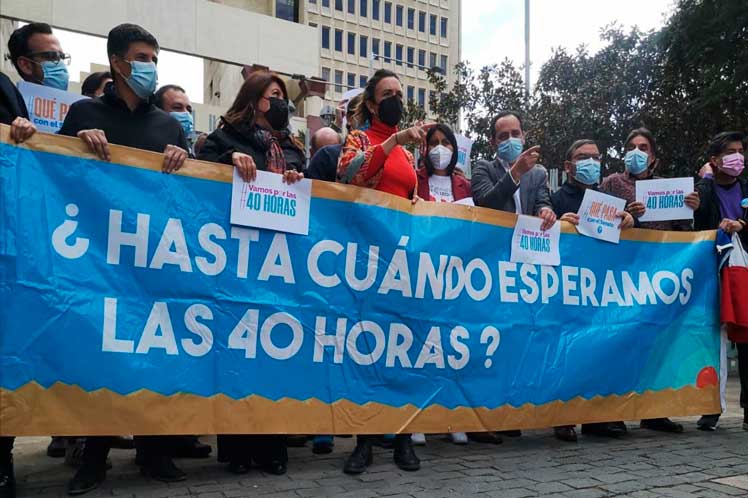 The initiative was presented in 2019 by communist representative Camila Vallejo, but the last time it was seen in Congress was in January 2020 when it was approved by the Senate Labor Committee.

The legislative text establishes the reduction of working hours from 45 to 40, and although it is rejected by the Government and business sectors and right-wing parties, it has strong support from the population, digital weekly El Siglo says this Wednesday.

In the opinion of its promoters, it has long been pushed aside giving as an excuse the situation of the Covid-19 pandemic, the economic crisis that affects the country and other projects considered of greater urgency.

Yesterday, legislator Camila Vallejo pointed out that this campaign seeks to summon senators, especially the members of the Labor Commission, to put the project on the agenda again.

She assured that ‘there is no economy that can be raised with workers with serious mental health problems, overwhelmed, depressed and stressed out. Those who want economic growth and productivity cannot continue to crush workers’.

As for representative Karol Cariola, head of the communist bench in the Lower House, she stressed that the text ‘has tremendous citizen support and it cannot be that due to the lack of political will of some senators this project is stalled’ and claimed it should be at least discussed.

Also aligned, Miguel Nazal, member of the National Coordinator for the 40 Hours, considered that there are pressures from business sectors so that this project does not move forward.

He also pointed out that if the Senate has had the capacity to expeditiously process other bills, they should also have it to carry out this project.