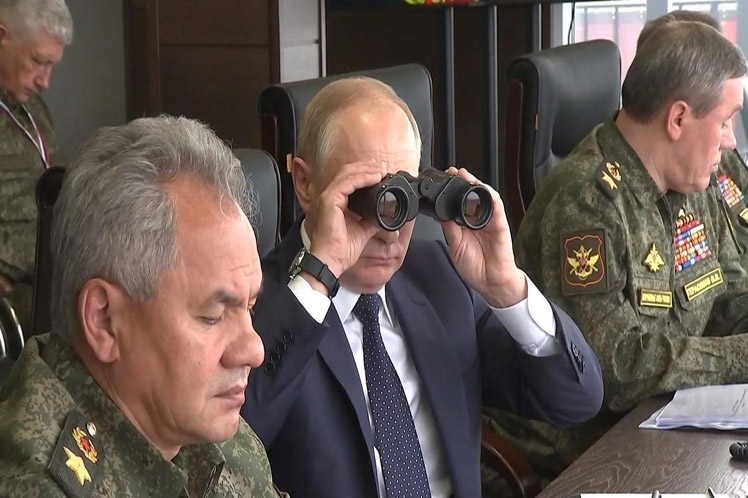 Accompanied by Defense Minister Serguei Shoigu and Chief of the General Staff Valery Gerasimov, the president traveled to the territory to check on the exercises, which began on September 10 and will finish on September 16.

The training was arranged by the Armed Forces of Russia and Belarus, and on this occasion, contingents from Armenia, India, Kazakhstan, Kyrgyzstan and Mongolia are also taking part, the Kremlin press service indicated.

On Monday, they held joint drills to repel the enemy offensive, conduct defense maneuvers, concentrated fire attacks and defeat insurgent forces based on previous experience, such as fighting in Syria, the defense ministry highlighted.

The head of State witnessed the demonstration of the new B-19 combat vehicle, the use of Iskander-M ballistic missile systems, capable of hitting targets located between 50 and 500 kilometers, Inokhodets attack drones, used for the first time in exercises.

West 2021 takes place at different practice ranges in Belarus and Russia with the assistance of about 200,000 troops, over 80 airplanes and helicopters and about 760 units of military equipment.

Those practices are taking place amidst the worsening international context, Moscow’s and Minsk’s complaints about the approach of NATO forces to the borders of their countries and the danger posed by a possible burst of the Afghan conflict beyond the borders of that country. However, Russia and Belarus have reiterated the defensive nature of the maneuvers.

Finland’s moving away from military neutrality, a mistake Putin says

Putin expresses his condolences to Cuba over explosion in Havana

Putin and Erdogan talk about Ukrainian troops in Azovstal

Finland’s moving away from military neutrality, a mistake Putin says

Putin expresses his condolences to Cuba over explosion in Havana

Putin and Erdogan talk about Ukrainian troops in Azovstal