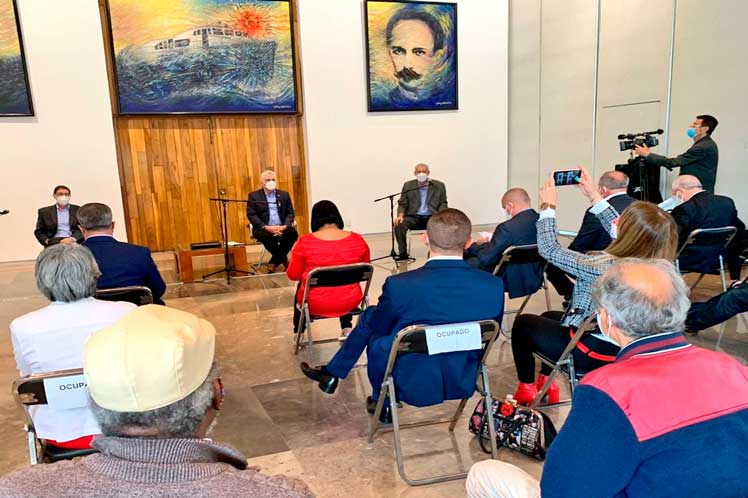 The Cuban president, who is concluding an official visit to Mexico on Friday, at the invitation of his counterpart, Andres Manuel Lopez Obrador, and will attend the 6th Summit of the Community of Latin American and Caribbean States (CELAC) on Saturday, met with his compatriots from the Jose Marti Association of Cuban Residents in Mexico, in what was described as a very productive exchange of ideas.

In his introduction, Diaz-Canel said that the dialogue initiated by Fidel Castro with the Cuban community abroad is unstoppable. He highlighted the migration law approved during Raul Castro’s term in office, orderly migration, not only the departure from Cuba but also the return, and mentioned other ongoing processes. He referred to responses to the Cuban community abroad such as those related to the validity of passports, the analysis of solutions to concerns at these times of pandemic, including the closure of borders and the consular services that are maintained.

Diaz-Canel talked about current issues such as investments in the country by Cuban residents abroad, the interest in their participation in the economic recovery, and the proposals that are coming, as well as decisions regarding the contextualization of the economic model and the tightening of the blockade by the United States.

The Cuban head of State charged that US President Joe Biden has failed to fulfill his electoral promises regarding the treatment of Cuba, has kept the economic and other coercive measures enforced by his predecessor, Donald Trump, intact, and has not reduced the intensity of the blockade.

He told the Cuban residents that the commitment to hold the 4th Nation and Migration Conference is kept, although he did not mention a date, but took it for granted, which raised applause among participants.

Diaz-Canel thanked the Cuban residents for the excellent national meeting, although held virtual this year, the attention to the medical brigades working in Mexico, the donations, and especially the way in which they faced the Miami-funded media campaigns against the Revolution with Washington’s consent.

Those who spoke, as it was impossible to give the floor to everyone, presented new ideas that were noted by the Cuban president, who thanked them for their welcome and the ideas presented.

Association Coordinator Sergio Chaviano and Olivia Garza, welcomed the Jose Marti and its subsidiaries in the interior of the country, many of which were represented at the meeting, while those who could not arrive, sent messages.

Diaz-Canel took note of all the proposals and said that some of them, such as the awarding of a distinction to the doctors of the Henry Reeve Contingent, can be materialized at the next nation and migration conference.