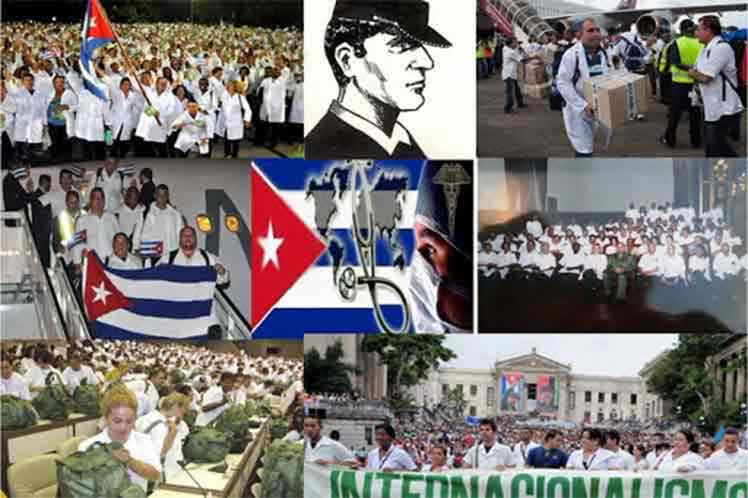 The main role of this specialized medical contingent, founded by the leader of the Cuban Revolution, Fidel Castro, is to cooperate immediately in any country suffering from catastrophes such as hurricanes, floods and other phenomena, as well as to face major epidemics.

Henry Reeve, the name that accompanies the island’s army of doctors, was that of a young American known to posterity as ‘the little Englishman’, who at the age of 19 traveled to Cuba to join the Liberation Army in a frank gesture of support to the emancipating cause fighting the Spanish colonialism in the second half of the 19th century.

In 2006, the Henry Reeve Contingent arrived in Indonesia to help that nation struck by an earthquake, as well as in 2010 to Chile and Haiti, the latter hit by the cholera epidemic.

But perhaps one of the most challenging missions for its members was that of Ebola, an epidemic that hit West Africa.

A group of 260 health professionals traveled in 2014 to Sierra Leone, Guinea and Liberia, the countries hardest hit by the disease. They saved the lives of approximately 7,000 people.

The outbreak of the Covid-19 pandemic -whose effects continue to hit the world- did not stopped Cuba’s medical solidarity.

By May 2020, the Caribbean island had contributed 2,300 health professionals distributed in 26 medical teams in the fight against the disease, according to data declared by Cuban Public Health Minister Jose Angel Portal, when he spoke at the World Health Organization Assembly.

The Henry Reeve Brigades arrived in Italy when the scenes and photographs of military trucks loading coffins in that country filled the social media.

They were applauded in the Principality of Andorra and Azerbaijan. For the first time, aid reached Europe, in the most sensitive moments when the disease was passing through Europe.

By September 2020, 43 brigades were active in 33 countries and 2,523 professionals were treating patients who were victims of the lethal disease.

In 2021, several groups have returned to the national territory after the work accomplished, with dissimilar origins among which stand out South Africa, Mexico, Panama, St. Vincent and the Grenadines, Belize, among others.

Expressions of gratitude are coming today in the form of dozens of calls for a Nobel Peace Prize to these doctors.

Although their cooperation is not driven by winning awards, the Henry Reeve Brigades, hold the Dr. Lee Jong-Wook Memorial Public Health Award, granted by the World Health Organization, in May 2017, in recognition of the work deployed in the fight against Ebola in Africa.

Al-Mayadeen news network expresses its solidarity to the Cuban people

Medical donation from US solidarity groups arrives in Cuba

Al-Mayadeen news network expresses its solidarity to the Cuban people

Medical donation from US solidarity groups arrives in Cuba