A million voices call to end the US blockade on Cuba 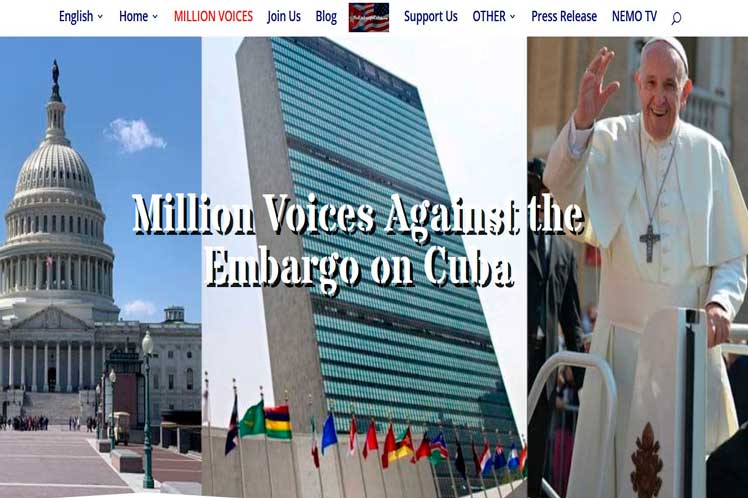 A million voices call to end the US blockade on Cuba

The initiative was launched by the No Embargo on Cuba movement, known by the acronym NEMO and made up of Cuba-Americans and US citizens with the aim of collecting a million signatures through social media from around the world at https://www.facebook.com/groups/noembargo.

Jose Oro, NEMO’s vicepresident told Prensa Latina that letters will be handed over to 400 members of the House of Representatives and 80 senators to make them aware of the public outcry demanding the end of the hostile economic policy.

In explaining the initiative, NEMO points out that President Joe Biden has refused to keep his campaign promise; instead, he ‘has preferred to attend to the demands of the Cuban far-right, who did not vote for him, and never will, over those who voted for him in the hope that he would do the right thing.’

The call through https://www.noembargocuba.com NEMO underlines that ‘the embargo on Cuba is especially abominable in the midst of a fierce pandemic.’

It further stresses ‘Biden and his Secretary of State are carrying out a policy that does not benefit the American people, which is why we ask for the reasonable, intelligent, and compassionate intervention of the Congress of the United States’ to do away a policy that does not only hurt the Cuban people, but it also affects Washington’s international relations with its long-standing allies.

It ‘expressly damages the responsibility of this nation (US) to the rest of the world, which is why we request the intervention of the U.N. Secretary General, António Guterres.

As the blockade is aimed at suffocating a nation in despair from hunger and lack of medicine, ‘it has nothing to do with a faith of love and compassion, which is why we ask for the intervention of the Pope of Rome,’ it adds.

NEMO underlines that ‘the embargo kills and it must end now. The 243 additional sanctions imposed by Donald Trump aggravate the genocide against a dignified people who have squandered solidarity all around the world.’