Raul Castro talks with Vietnamese president during visit to Cuba 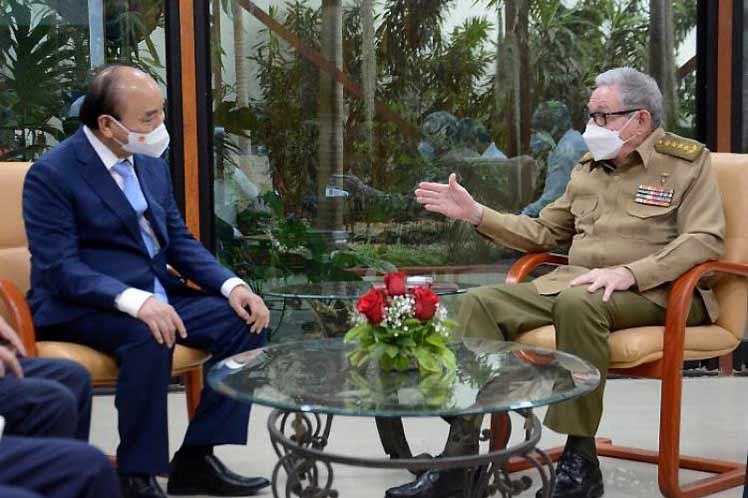 Raul Castro talks with Vietnamese president during visit to Cuba

The president sent greetings from the general secretary of the Central Committee of the Communist Party of Vietnam, Nguyen Phu Trong; while Raul Castro sent him a big hug and an invitation to visit the island.

According to national television news, Nguyen Xuan Phuc said that his stay, the delegation accompanying him and the agreements signed express the special character of bilateral relations and the unity between the two countries.

Both parties agreed that it was a successful visit, carried out in a context of the Covid-19 pandemic and in the midst of the difficulties generated by the tightening of the economic, commercial and financial blockade imposed by the United States on the Caribbean nation.

In addition, the President stressed that there is potential to further expand cooperation in all spheres and expressed his confidence that the new generations of leaders will strengthen these ties.

Nguyen Xuan Phuc arrived today in the province of Santiago de Cuba (east) to pay tribute to the historic leader of the Revolution, Fidel Castro, at the Santa Ifigenia cemetery.

Earlier, Cuban President Miguel Diaz-Canel and his Asian counterpart presided over the signing of several collaboration agreements in areas ranging from the economy, food industry, health, communications, among others.

The Caribbean head of state also imposed the Jose Marti Order on the Vietnamese leader, the highest decoration awarded by the Caribbean nation.