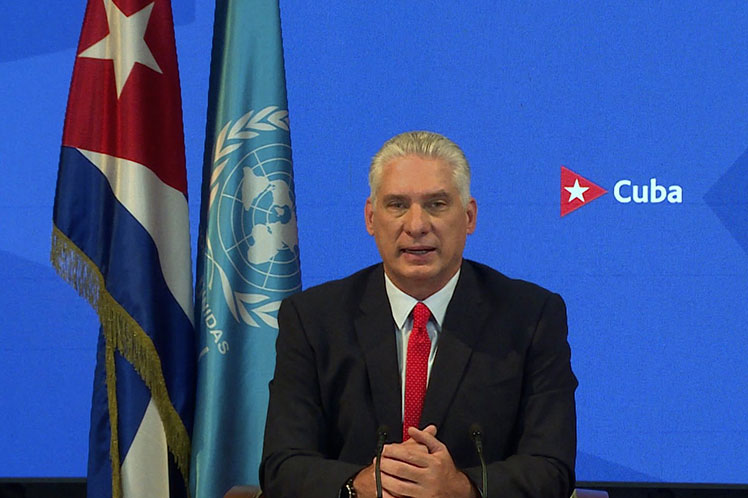 Cuba is not afraid of lies nor does it kneel to pressures, conditions or impositions, wherever they come from, the president reaffirmed in his virtual speech at the United Nations Summit on Food Systems, in the context of the 76th UN General Assembly.

Diaz-Canel recalled that Cuba has been suffering for six decades the cruelest and longest economic, commercial and financial blockade against a nation, which was intensified in an opportunistic and criminal manner amid the Covid-19 pandemic.

The current US administration of President Joe Biden kept all 243 coercive measures taken the government of President Donald Trump unchanged, including the inclusion of Cuba in the illegitimate and immoral list of countries that allegedly sponsor terrorism, he said.

He added that as part of that policy, Cuba is the victim of an unconventional war that involves millions of dollars in funds from the US Treasury for campaigns of manipulation and lies, using new information technologies and other digital platforms.

The head of State pointed out that these actions seek to portray an absolutely false image of Cuba’s reality internally and externally, sow confusion, destabilize, discredit the country and justify the doctrine of regime change.

In his speech, Diaz-Canel condemned Washington’s use of economic coercive measures against sovereign States, and its demands for its allies to build coalitions to overthrow legitimate governments.

Diaz-Canel stressed that in this scenario, Cuba practices selfless solidarity with those who need it, and gratefully receives support from governments, peoples, friends and the community of Cuban residents abroad.