Cuban foreign minister meets with US citizens opposed to blockade 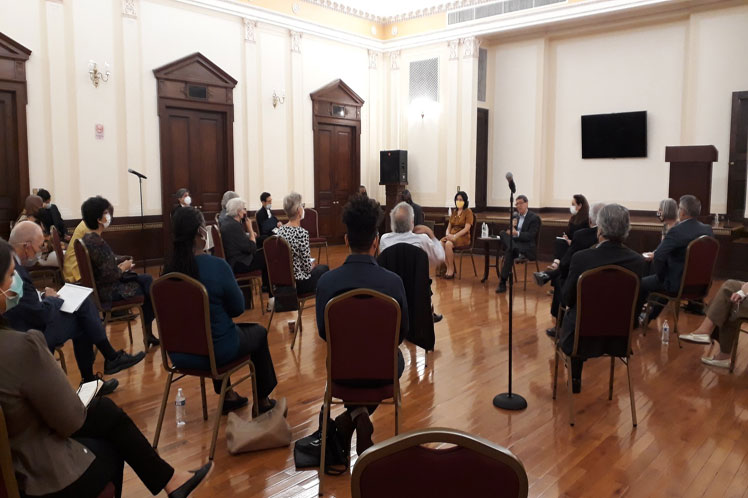 Cuban foreign minister meets with US citizens opposed to blockade

On the occasion of his presence in New York to attend the high-level segment of the 76th United Nations General Assembly, Rodriguez Parrilla held a friendly meeting and a webinar with representatives of the National Council of Churches of Christ in the USA.

The Council has a long-standing, genuine relationship of friendship with the National Council of Churches of Cuba, the foreign minister said.

During the virtual meeting, participants discussed the current situation in Cuba, the fight against Covid-19 and the immunization process with Cuban-made vaccines, as well as the obstacles caused by the blockade during the combat against the pandemic.

At the meeting, which was attended by members of various religious organizations, participants noted the obstacles posed by the US policy on Cuba by limiting travels and exchanges between the two countries.

Jim Winkler ratified the will to continue strengthening the friendship and religious ties that unite the two nations, as well as condemning the blockade imposed by Washington on Cuba for more than six decades.

He also referred to the letters sent to the Joe Biden administration, in which different churches have expressed their request for the removal of sanctions, the lifting of the blockade and the improvement of bilateral relations based on mutual respect.

For his part, Carlos Fernandez de Cossio, director general of the United States Department at the Cuban Foreign Ministry, wrote on Twitter that in the case of remittances, the White House’s position is to use the people as hostages in order to have the ability to rule how Cuba organizes its finances and institutions.

The White House knows that the legend according to which the Cuban government pocketed 20 percent of remittances is not true, he said, in response to opposing sectors that prevent family and friends from sending aid to their relatives in Cuba.