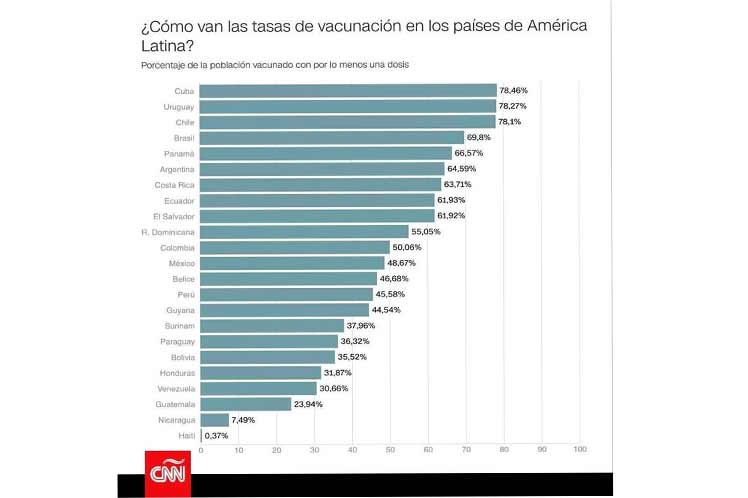 Figures from the Cuban Ministry of Public Health show that, up to the September 26, 9,048,689 people (80.9 percent) out of a slightly more than 11,180,000 inhabitants of Cuba have received the first shot of Soberana 02, Soberana Plus or Abdala.

In addition, some 5,019,799 people have completed their vaccination schedule, that is, the three doses mentioned above, plus one dose of the Soberana Plus vaccine for convalescents, which make up 44.9 percent of the Cuban population.

Cuba is also the first country in the world to authorize a national Covid-19 vaccination campaign for children, and according to official data, more than 1.8 million doses have been administered to groups aged from 2 to 18.

The aim is to end September with the administration of at least the first shot to two million children within the two-dose schedule of Soberana 02 and a booster of Soberana Plus, 28 days after.

In addition, since Thursday, the Center for State Control of Medicines, Equipment and Medical Devices (CECMED), the national regulatory authority, has authorized the emergency use of the Soberana Plus vaccine in people over 19 years of age who recovered from Covid-19.

The approval of this vaccine, designed by the Finlay Vaccine Institute (IFV), is based on the results of the clinical trials carried out, after demonstrating the requirements regarding quality, safety and immunogenicity for this population group, CECMED explained.