The Torch of Liberty 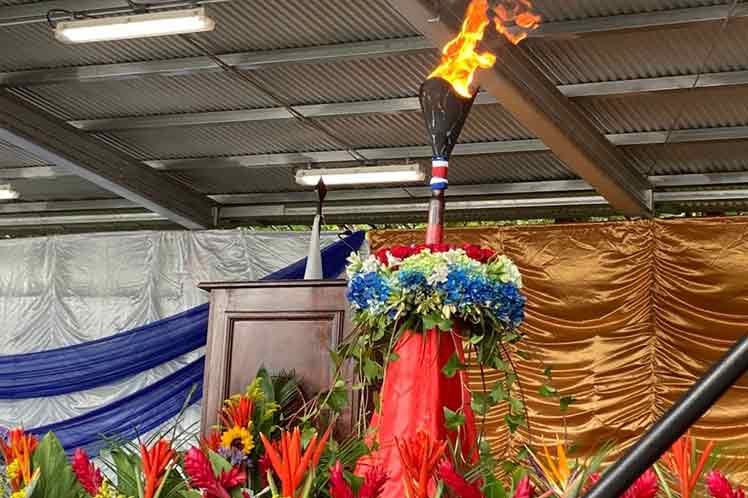 The Torch of Liberty

After crossing Guatemala, El Salvador, Honduras and Nicaragua, carried by students, the torch enters Costa Rica on September 13, and after touring some 380 kilometers from the Peñas Blancas border post with Nicaragua, it gets to Cartago, a city from 1821, where the Independence Flame is lit to preside over national celebrations to mark the date.

Over the past two years the Covid-19 pandemic has made it impossible for the Central American fire to take the usual journey, but not its importance, since most countries celebrated it virtually or in person, above all this year, when the region marked the Bicentennial of their Independence.

The Torch has a special meaning for Costa Rica, declared a National Symbol on September 14, 2005 as a representation of Costa Rican freedom and idiosyncrasy.

With that decision, Costa Ricans also express their willingness to hope that a light will always be shed on its free and sovereign people.

Although researches say that the so called Torch Race began in 1959, many historians, mainly from this nation, assure that it was in 1964, thanks to the initiative of Costa Rican educator and sportsman, Alfredo Cruz Bolaños.

There is an abundant bibliography on this outstanding person (1918-2006), who was the first Costa Rican graduated in Physical Education, which he studied at George Williams College and New York University, and after returning to the country in 1938 practiced different sports, including swimming, which he formally introduced here in 1944.

In 1946 he established the Instituto Nacional de Educación Física (National Physical Education Institute) and started sports teaching, promoted the reinstatement of the Juegos Deportivos Intercolegiales (Inter-School Sports Games) in 1952, the construction of the National Gym and the refurbishing of the Ojo del Agua public baths, where Francisco Rivas was trained, the only technician who won medals at the Olympic Games just like swimmers Silvia and Claudia Poll.

However, Cruz Bolaños’ main initiative is the Central American tour of the Torch of Independence through the same route of that courier that brought to Costa Rica the news of the region’s independence on October 13, 1821, almost a month after it was signed in Guatemala.