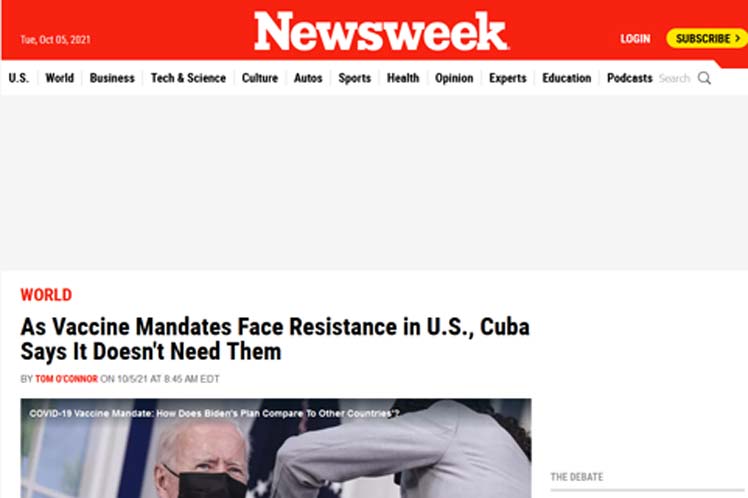 ‘ The people is excited and eager to be vaccinated’ said to this prestigious magazine Carlos Fernández de Cossío, director for the United States of the Cuban Foreign Ministry.

‘Today we have about 50 percent of the vaccination complete,’ added Fernández de Cossío as he explained that ‘our goal is to get 92 percent of the population fully vaccinated by the end of November.’

The weekly magazine noted that the small nation is unique in the entire Western Hemisphere, apart from the United States, in developing the immunogen.

In comparisson with the United States, in Cuba 84 percent of the population have received at least one dose, while in America that makes just 65 percent.

Cuba is also the first to begin vaccinating children as young as two years old in an attempt to help the island overcome the Covid-19 pandemic, it added.

It was further emphasized that, despite its relatively modest size, Cuba has long been advancing in the field of health and medicine, including cutting-edge biotechnology, which proved to be an especially strategic investment when Covid-19 began ravaging the world early last year.

Before the vaccines became available, Cuban doctors and health experts were sent all over the world, including to the poorest countries in Africa, Asia and Latin America, as well as to developed nations in Europe, to fight the worsening pandemic, the material recalled.

But Cuba, like many countries around the world, paid a high price. Although infections and deaths did not skyrocket out of control as in other countries, the loss of tourism revenue and other side effects of the Covid-19 scourge wreaked havoc, the article commented.

To make things worse, the Donald Trump administration (2017-2021) – Newsweek added – took a series of steps to tighten the decades-long trade embargo (blockade) against the island located just 90 miles off the coast of Florida.

Since taking office in January, President Joe Biden has not yet eased these restrictions, but added new targeted sanctions against certain officials and entities in the wake of the July unrest on the island, the magazine noted.