Cuba has suffered the consequences of terrorism for decades 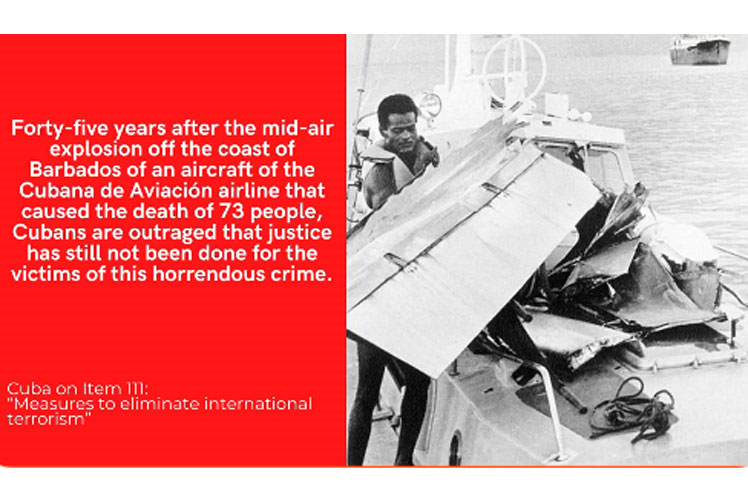 Cuba has suffered the consequences of terrorism for decades

On his official Twitter account, the diplomat underscored how those actions killed 3,478 people and injured more than 2,000.

On Tuesday, in his speech at the Sixth Committee of the General Assembly, Pedroso also illustrated how his country has historically been a victim of terrorism.

The diplomat recalled one of the most horrendous terrorist attacks committed against Cuba: the mid-air explosion, off the coast of Barbados, of a Cubana de Aviacion aircraft, which killed 73 people.

Pedroso also condemned the terrorist attack against the Cuban embassy in Paris on July 28, the result of a brutal campaign inciting to hatred, violence and hostile acts, promoted with total impunity on digital platforms from the United States.

This is an open violation of International Law and the Charter of the United Nations, the Cuban diplomat stressed.

Furthermore, a little over a year ago, the Cuban embassy in Washington was the victim of another terrorist attack when an individual fired 32 projectiles from a semi-automatic rifle against the diplomatic headquarters, he said.

Such action endangered the lives of 10 officials who were in the building, and so far the US government has not spoken on the matter so far, the representative said.