Parliament to assess a request to investigate Ecuador’s President 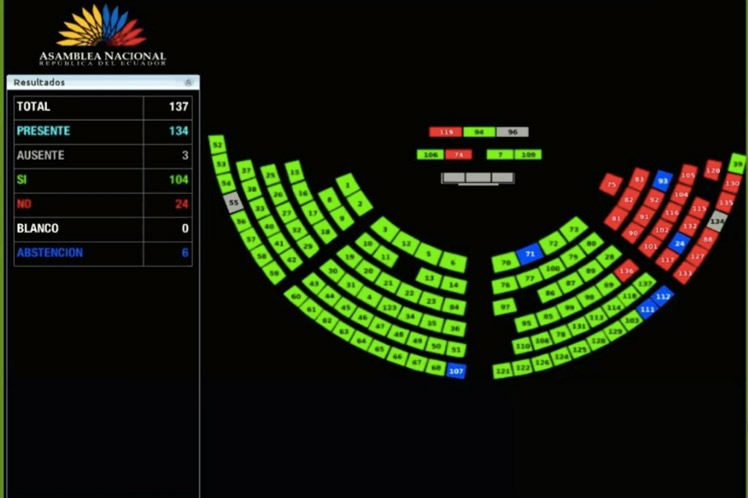 Parliament to assess a request to investigate Ecuador’s President

The request was promoted by the Union for Hope Movement (UNES) and was supported by 104 votes in favor, while only 24 legislators were against the debate.

On presenting the initiative, the parliamentarian of UNES, Ronny Aleaga exposed that the answers offered to the citizens by the president are insufficient to define his possible links with the Pandora Papers, whose content includes a report of world figures with companies abroad considered tax havens.

‘We have received with indignation, but without astonishment the allegation that President Guillermo Lasso is included in a long list made up of presidents, former presidents, politicians, entrepreneurs and celebrities who hide resources in tax havens to avoid paying taxes through the tricky way of setting up offshore companies,’ he emphasized.

Aleaga referred that in face of that revelation, it is possible that the head of State has failed to comply with the legal mandate of the Ethical Pact approved by a majority of 52 percent in popular consultation in 2017, which prohibits candidates or public officials to have resources or assets in tax havens.

According to the lawmaker, the Assembly must intervene to clarify the issue, which for many could imply a problem of tax evasion.

‘The Ecuadorian people are attentive and watchful of what we do and it is our duty to give them clear and transparent answers,’ Aleaga said.

In that regard, he pointed out that they must be consistent with the citizens, whose trust and vote allows them to be their voice.

The proposal to assess the request to investigate the governor was approved despite a statement issued by Lasso in which he confirms the dissolution of 11 offshore companies and denied any relationship with three other companies.

Likewise, on Wednesday, the president requested the General Comptroller’s Office to review his sworn statement of assets before assuming the presidency, on May 24; thus, he waived the bank secrecy established by the Organic Monetary and Financial Code.

Cuba could have civilized cooperation with U.S., says Díaz-Canel

Cuba could have civilized cooperation with U.S., says Díaz-Canel