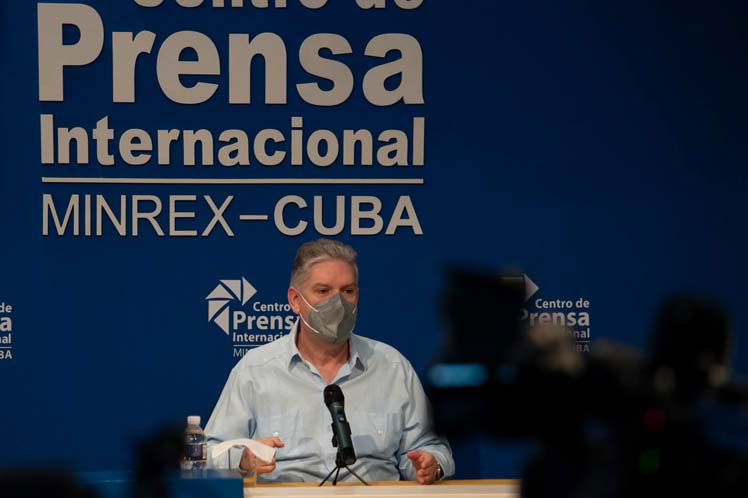 In a press conference, he explained that overcoming the contraction of the gross domestic product (GDP) of last year, which was of minus 10.9 percent, takes time, especially because circumstances like the economic blockade of the United States and the pandemic of Covid-19 keep hurting the economy.

However, he said, economic activity has not stopped. ‘We are not passive observers of Cuban and international situation, we have looked for solutions all the time.’

In this regard, he pointed out that given the decrease in the number of sick people and the advance of vaccination, the nation undertook the reactivation of economic activities, going through the opening of certain services and international tourism, on November 15.

Added to this is the concretion of measures implemented to state companies, main economic actor of the country; and in the private sector, with changes in self-employment, like the expansion of their operation possibilities.

Also the approval of 162 micro, small and medium enterprises (MSMEs) and six non-agricultural cooperatives, which have already produced more than 2,300 jobs.

Gil explained that in an initial stage several private businesses became MSMEs whose structure pointed to this new form of organization, in a process with ‘a minimum of bureaucracy and maximum of agility, transparency and trust from the Ministry of Economy towards applicants’.

However, he specified, there are already MSMEs and cooperatives that come from new ventures, and clarified that there are no limits on the amount to be approved, and that the call to present papers is open and does not expire.

The deputy prime minister also referred to the provisions adopted to give greater autonomy to state-owned companies, and gave as positive example of their impact the fact that more than 60 enterprises began remuneration processes for workers without applying salary scales.

This allows them to pay according to the performance of each person and actual results, which places them in better conditions compared to the private sector.

Cuba is going through an exceptional situation of lack of cash and the US blockade continues, the Minister of Economy said. He recalled that the 243 coercive measures applied by Donald Trump administration (2017-2021) have been maintained.

Despite this, we are in a stage of diversification of the productive fabric, of making it more flexible for economic actors, and other actions, which will allow us to gradually recover the levels of production and supplies to the population.

“Cuba will stand and defeat the US blockade”

“Cuba will stand and defeat the US blockade”