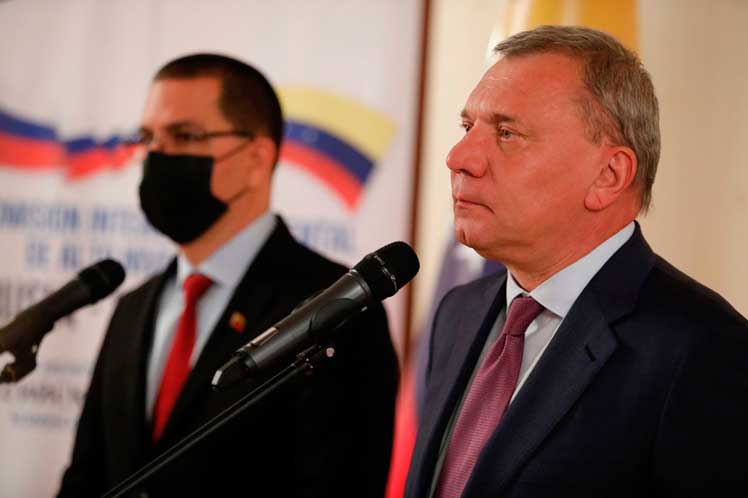 At the closing of the XV High-Level Intergovernmental Russia-Venezuela Commission, held in this capital, he expressed repudiation for the unilateral measures of the West against the South American nation, which slow down its social and economic progress.

In this sense, Borisov highlighted the importance of the anti-blockade bill approved in Venezuela, which allows protecting foreign businessmen and their investments from sanctions.

The senior official called for promoting a constructive atmosphere around the Dialogue Table between the Bolivarian Government and the opposition, exchanges that he considered of utmost importance to achieve the stability that the country requires.

Regarding bilateral cooperation, he highlighted the delivery to Venezuela of 3,850,000 units of the Sputnik V vaccine against Covid-19 since the end of 2020 and 900,000 doses of insulin, in addition to other drugs in short supply.

He also referred to the registration of Russian immunizers EpiVacCorona and Sputnik Light against the SARS-CoV-2 coronavirus, which are part of new agreements for the use in the country.

Borisov stressed that the intensification of bilateral ties benefited from the opening of the air route between Caracas and Moscow, which will allow increased tourism to the South American nation and the transfer of greater volumes of goods between the two.

For his part, Minister of Industries and National Production of Venezuela, Jorge Arreaza, pointed out that joint comprehensive cooperation has been consolidated in different sectors and without interruption since 2002.

He pointed out that in these years of attacks and restrictive measures by the United States and its allies against his country, Russia not only raised its voice to denounce and reject them, but also strengthened collaboration.

The Venezuelan minister thanked Russia for the more than three million doses of Sputnik V received by the country ‘and we hope to meet the goals that we have set for ourselves of 10 million very soon’.

He pointed out that between Venezuela and Russia there are cooperation agreements that cover the energy, industrial, transport, technical-military, agricultural, health, education, finance and trade fields.

This Friday, at the closing of the meeting, senior officials from both governments signed nine memorandums of understanding in areas of energy development, info-communications, tourism and sports.