Cuba rejects at UN consumerist patterns that pollute the planet 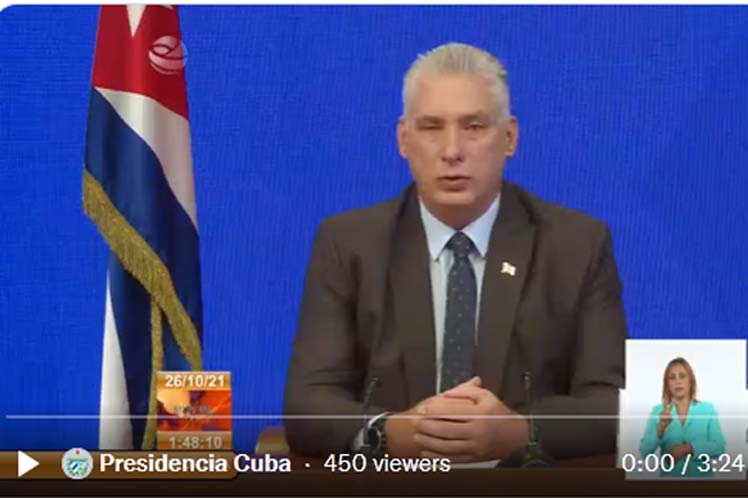 Cuba rejects at UN consumerist patterns that pollute the planet

During his virtual intervention in the high-level debate of the General Assembly entitled, ‘Climate Action: for People, Planet and Prosperity,’ the president stressed that there will be no solution to the climate crisis at the expense of the right to development of those most in need.

Nor at the expense of the nations worldwide that struggle day by day against hunger, poverty and underdevelopment, derived from the unfair international order, he added.

Cuba’s head of State affirmed that the irrational and increasingly unsustainable patterns of production and consumption of capitalism, and the excessive exploitation of natural resources dramatically accelerate the danger of extinction of the human species.

‘Stopping that rampage is of the utmost urgency, although those who propitiate it seem to ignore it.’

Diaz-Canel explained how Cuba is making progress in the implementation of its Plan to Fight Against Climate Change (Task Life) and in meeting the goals assumed in its Nationally Determined Contribution, despite the unprecedented tightening of the US blockade for over 60 years.

More and more possibilities of saving life on the planet are being jeopardized, while a system that privileges a small minority and encourages irrationality, selfishness and the destruction of the environment continues to exist, he noted.

It is therefore imperative that the richer nations take the lead in reducing emissions and in providing the necessary means of implementation to developing countries, in accordance with the principle of common but differentiated responsibilities, he pointed out.

The president also expressed his hope that the forthcoming United Nations Climate Change Conference, known as COP26, will result in concrete solutions to the crisis that threatens human life.

Recent studies show that the average global temperature has increased by 1.1 degrees Celsius and will exceed two degrees Celsius in the century, with catastrophic consequences for life on the planet, of which we receive daily previews on the news and other news, he underscored.

Diaz-Canel also reaffirmed Cuba’s commitment to environmental protection and the full implementation of the Framework Convention on Climate Change and its Paris Agreement.