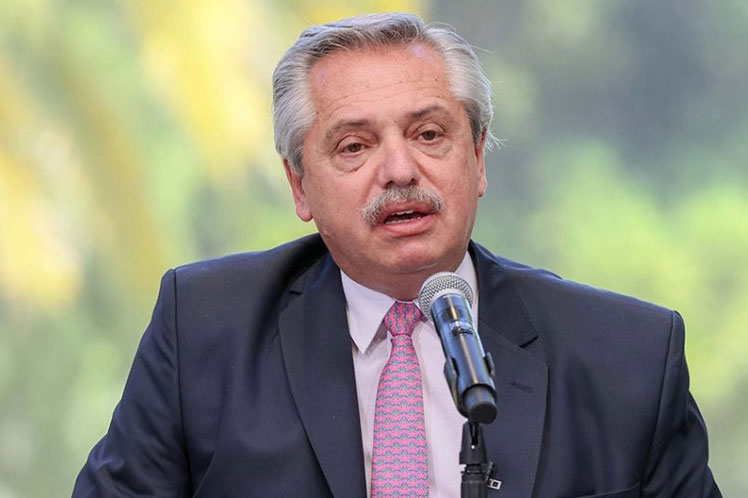 Body: When intervening at the meeting, based in Glasgow, Scotland, the president called for identifying clean technologies as global public goods and establishing technology transfer agreements.

At the same time, he defended the formation of a committee that recognizes the principle of common but differentiated responsibilities, which takes into account the structural limitations and the social welfare of all our peoples.

“Without sustainable financing there will be no sustainable development and responsibilities, although common, are different between countries,” said the Argentine president during his speech, who insisted that the developing world today needs genuine financing to advance the climate agenda.

During the high-level session, which was called Action and Solidarity: The Critical Decade, Fernández stressed that multilateral cooperation organizations must commit at least 50 percent of their loan portfolio to environmental actions to achieve a transition towards a model of integral, sustainable and inclusive development.

In another part of his presentation, he insisted on channeling Special Drawing Rights (SDRs) for sustainable development and promoting the swap of debt for climate action to design payment mechanisms for eco-systemic services and install the concept of environmental debt. .

Referring to Latin America and the Caribbean, he stressed that the channeling of these resources to the regional development bank is key to leverage the technological transition necessary to reverse a worrying dynamic that is now evident to all.

Likewise, he insisted on strengthening environmental multilateralism and advocated that the funds already committed to promote climate action should be honored and warned that today the Agenda for Sustainable Development is in intensive care and the welfare gaps are enormous.

On the other hand, he announced that Argentina formalized a two percent increase in the Nationally Determined Contribution (NDC), which results in a commitment 27.7 percent higher than that assumed in the first NDC in 2016.

“The clock of the planet will not stop. Together we can generate the conditions to materialize the necessary changes. Environmental action is now ”, he concluded.