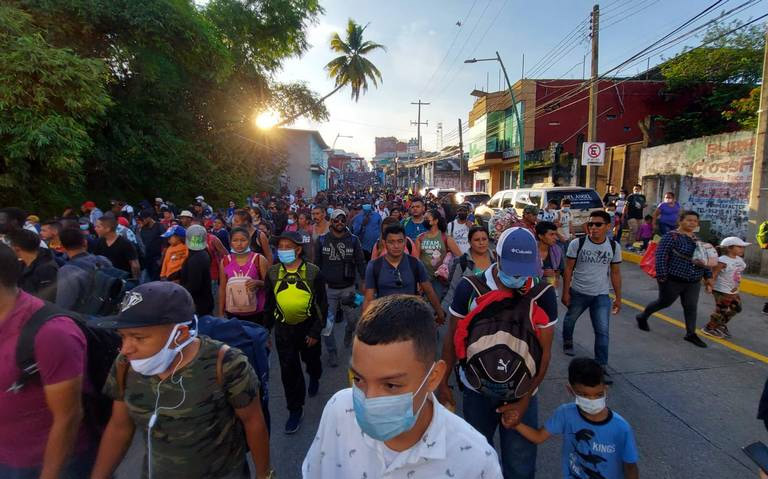 Luis García Villagrán, director of the Center for Human Dignity, one of the organizations promoting the walk, reported that yesterday they walked for eight consecutive hours from Galeana town to main municipality Pijijiapan, where they spent the night.

He said the contingent camped in the dome of the sports unit, where on Sunday 13 undocumented immigrants were shot, resulting in one dead and four injured when the truck they were traveling in did not stop to the National Guard’s order.

He commented the group is moving fast, and intends to continue the journey to Tonalá, Arriaga and, perhaps, to Tuxtla Gutiérrez, the state capital.

Heyman Vázquez Medina, parish priest of Huixtla town, denounced that individuals from the National Guard and the National Migration Institute (INM) threatened to arrest him when he transported children and women to Pijijiapan.

I carried water and medicines for the migrants, and on the way I distributed to them. There were a lot of sick children and I told them to get in my truck, but since there were a lot of them, I made four trips.

Someone from the National Guard who was there saw me in the last transfer, three kilometers from Pijijiapan and with their cars agents of that corporation and the INM blocked the road and surrounded me, he said.

He explained that, without realizing it, the uniformed men opened the rear doors of his truck and took out some people, who went on board a bus to return them to Tapachula, but other illegal immigrants forced them to get them off.

He denounced that they wanted him to get all the people out of his truck, and he replied he was taking them to the doctor because they needed attention. He said in that situation he called Irineo Mújica, director of ‘Pueblos sin Fronteras’ (Peoples without Borders), and arrived with another group of migrants, but in the brawl it created they had to give in.

He said troops threatened him and an INM official asked national guards to take him to the agent of local Public Ministry. They finally didn’t, but they took the license plate number from his truck and told him they were going to forward it.

32 rafters sent back to Cuba by US Coast Guard

32 rafters sent back to Cuba by US Coast Guard