Deputy Prime Minister of Cuba demands use of natural resources 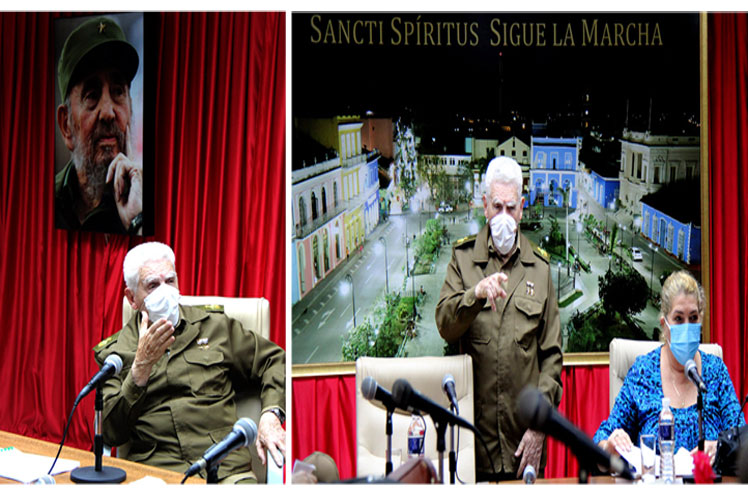 Deputy Prime Minister of Cuba demands use of natural resources

In the analysis in which René Mesa, Minister of Construction, and the highest authorities of the territory also participated, the involvement of the delegate of the Popular Power was discussed to ensure the execution of the works and the assigned resources and avoid their deviation .

Regarding this aspect, the also member of the Political Bureau of the Party affirmed that strict compliance with politics and popular control is a necessity as the basic tools to avoid the diversion and profit of resources destined for the welfare of the people.

Valdés appreciated that Sancti Spíritus is one of the provinces of the country with the greatest potential in natural resources to use them with initiative and creativity in homes and thus substitute imports.

He explained that the Housing Policy is ratified as one of the prioritized programs because of its scope for the benefit of the population and what it contributes to social development.

Therefore, he added, advancing its development, with agility and the contribution and initiatives of the communities, is a challenge to overcome obstacles and solve a problem that has dragged on for years.

It was revealed that the clay sector cannot keep up with the demand in the production of bricks and other essential pieces for various works, especially homes.

The deputy prime minister demanded to redesign the tactic and undertake a program in each territory according to the potential that is yet to be fully exploited.

The Construction Minister confirmed to Prensa Latina that national cement production is stabilizing as the operations of Cementos Cienfuegos, the largest plant in the country, and the René Arcay Factory, in Mariel, resume this year.

Likewise, it was learned that the plant in Siguaney has the white cement kiln in operation -the only one in Cuba- and is working to start the gray cement kiln this month and, although it will not comply with what was planned, they will deliver more than 75 thousand tons, of which 10 thousand are white.

Issues related to energy, production and saving of the resources with which we have as demand the country and the economy in the current circumstances were also addressed.