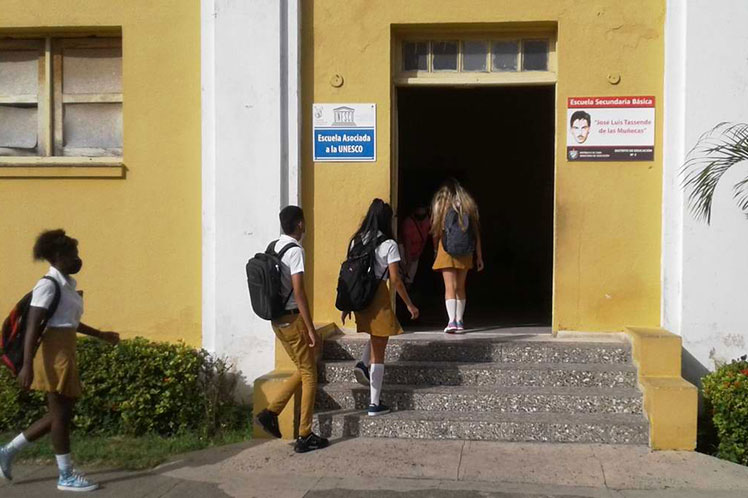 Charged with symbolism, the institution evokes January 28, 1960, when the leader himself handed over the former sinister enclave to the Ministry of Education to foster education in the very cells that before the revolutionary triumph knew only violence, torture and death.

On this Monday of resumptions and reaffirmation, the open yard, classrooms and corridors were filled with students of primary and secondary education, some by the hand of their parents who expressed the joy and confidence of the return after long months of pause due to the Covid-19.

In the building divided into blocks, which takes an entire block in the highest part of the irregular topography of the city, new walls turned pavilions that served as bedrooms for Fulgencio Batista’s soldiers into classrooms and cells became dining rooms.

Inside, there are five primary schools and one Junior high, all named after fallen assailant heroes, where thousands of children and young people receive free education, a distinctive feature of the national education system.

What used to be the second Cuban military stronghold was built in 1859 and its initial name ‘Nuevo Presidio’ (New penitentiary) barracks changed in 1868 to ‘Reina Mercedes’ (Queen Mercedes) in honor to the wife of Spanish King Alfonso XII to later take the last and final name in homage to Independence war insurgent leader Guillermo Moncada.

During the first days of the Rebel Army’s triumph, images of bearded former guerrilla combatants knocking down the walls of the main military institution were like an announcing sign of the immense educational work the socialist system would build on the Island.

Students vaccinated against SARS-CoV-2 and the application of strict epidemiological measures result in peace of mind for families, as throughout the island, in a clear sign of stability and peace.