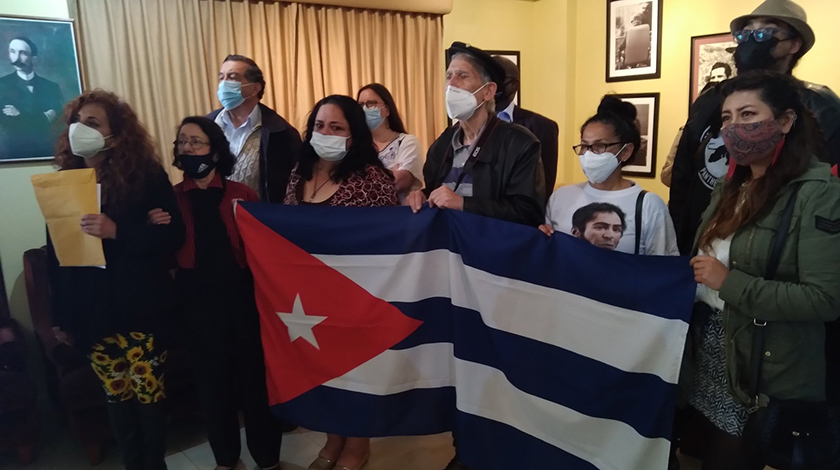 In a statement, PCE once again strongly rejected “the coup attempts against Cuba” and stressed “that Cuba’s ills are caused by the criminal blockade the United States has imposed on Cuba for over 60 years.”

The text was released due to a non-law proposal (NLP) of the Popular Party (PP), which will be debated in the Madrid Assembly to consider Cuba a as dictatorship and that the Spanish Government puts some pressure on the European Union (EU) to impose sanctions on Cuba.

“This is one more example of PP´s interventionist stance with increasingly evident connections with Miami mafia and the Joe Biden administration.”

“If NLP is approved, the Government of the Community of Madrid would be responsible for trying to revive a destabilization process that has become clear in Cuba that it does not have any popular support,” PCE declared.

On the other hand, the PCE referred to attempts to conduct an opposition march on Nov. 15.

“Latest call to overthrow the legitimate Cuban government on past Nov. 15, headed by Yunior García, has been a real failure, having a great impact only on the media (…), related to the US administration, “which” have tried to publicize practically nonexistent protests in Cuba.”

The PCE also pointed out that Yunior García, “after his unsuccessful calls for overthrowing the Cuban Government, and without the approval of his followers, has fled to Spain with his wife, curiously after stating these days he had absolutely no income, that it would come to prove his links with foreign forces who do not cease in their coup attempts on Cuba. ”

“We strongly condemn PP´s interventionist stances in the Assembly of Madrid and of the Government of the Community of Madrid that they only intend to confront Cubans with each other, because if they were really concerned about the Cuban people´s well-being, they would immediately call for the end of the US blockade and sanctions instead of calling for destabilizing actions in Cuba.”