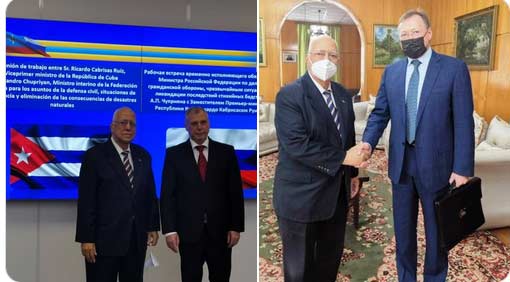 This Tuesday, the Cuban official met with the interim minister of Civil Defense and Emergency Situations, Alexander Chupriyan; with the president of the GAZ Group, Vadim Sorokin; and with the CEO of the oil company Zarubezhneft JSC, Sergei Kudryashov.

During the exchanges in this capital, Cabrisas explained that the main problems affecting the country are linked to the tightening of the United States blockade against Cuba, the impact of Covid-19 and the effects of climate change.

The Cuban leader thanked the donations of food and medical supplies sent by Russia to the Antillean nation to contribute to fighting the pandemic.

In this sense, he highlighted the relations of brotherhood and solidarity that unite the peoples and governments of Russia and Cuba, based on historical ties that, he stressed, are indestructible.

The parties ratified the willingness to continue developing bilateral relations, with emphasis on the economic, commercial, financial and cooperation spheres, in keeping with the excellent state of existing political relations between both countries.

Yesterday, the Cuban deputy prime minister met with the first vice president of the State Duma (Lower House of Parliament) of Russia, Ivan Melnikov, with whom he discussed bilateral relations.

Cabrisas is expected to hold a meeting with the co-chairs of the Cuban-Russian Intergovernmental Commission, to review topics of interest in economic, commercial, financial, scientific-technical and cooperation relations between the two countries.

In addition, he will be received by the head of the Russian Ministry of Foreign Affairs and by the main authorities of the Eurasian Economic Union (UEE), an integrationist bloc in which Cuba participates as an observer state.