Cuba and China for strengthening ties of friendship and cooperation 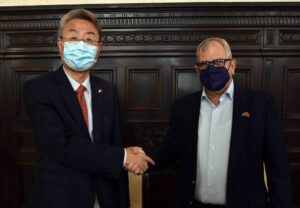 Cuba and China for strengthening ties of friendship and cooperation

Havana, Nov 23 (Prensa Latina) The strengthening of the ties of friendship and cooperation between Cuba and China was highlighted today in a meeting between the secretary of the parliament of the Caribbean island, Homero Acosta, and Ma Hui, the Asian country's ambassador here.

In the exchange, the parties stressed the intention of consolidating ties between both peoples, parties, governments and legislative bodies, in a relationship that last September reached 61 years of constant ties.

Acosta thanked China for the solidarity shown to Cuba and her firm position against the economic, commercial and financial blockade imposed on the Caribbean nation by the United States.

According to information published on the Cuban parliament website, Ma Hui received an update on the progress of legislative activity on the island, as well as the process of accountability of grassroot delegates to their constituents.

Other issues addressed were the strengthening of People’s Power -after the challenges outlined in the 8th. Congress of the Communist Party of Cuba (PCC) and the II Plenary of the Central Committee of the PCC-, and the day for the 45th anniversary of the organs of People’s Power.

The Chinese ambassador in Havana ratified solidarity with Cuba in the face of the most recent destabilization attempts, while acknowledging the island’s results in the confrontation with Covid-19 and the development of its own vaccines.

Ma Hui recalled that Cuba was the first nation in the Western Hemisphere to establish diplomatic relations with the Asian country, while referring to the main milestones of the Sixth Plenary Session of the XIX Central Committee of the Communist Party of China, and the accumulated experience for 100 years by this political organization.

Similarly, he recalled the virtual exchange held last May between the head of the Cuban parliament, Esteban Lazo, and the president of the Standing Committee of the National People’s Congress of China, Li Zhanshu.

At another point in the day, the Chinese diplomat held a meeting with Rogelio Polanco, a member of the Secretariat of the Central Committee of the PCC and head of its Ideological Department.

As published by Polanco on his Twitter social network account, both parties condemned the interventionist actions of the United States government against the two countries, and exchanged information on political processes of the PCC and the Chinese Communist Party.