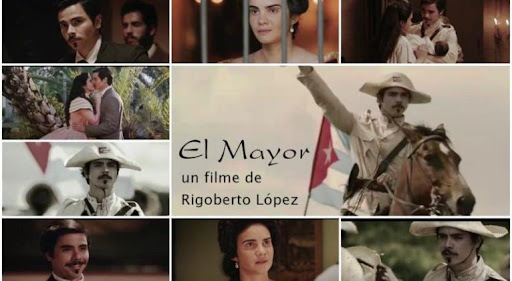 Lopez’s (1947-2019) production joins the interesting list of films that deal with that period of national history, the wars of independence from the Spanish metropolis, and at the same time, it is an approach to one of the most admired figures of the Cubans’ heroic deeds.

During his lifetime, its director said that, although the feature film contains some fictional elements, it does not betray the rigorous historical research on which it is based and recreates real events of the childhood and youth of the hero born into a wealthy Creole family until his death in combat at the age of 32.

El Mayor offers a vision of the period in the mid-19th century and its filming included six battles in the extensive Camagüey plains, in which up to 200 horses and 500 extras were used, while in the city scenes were filmed in the buildings visited by Agramonte, today jewels in heritage and in perfect building conditions.

Most of the film was shot there because in that city, once Villa Santa Maria del Puerto Principe, there is still evidence of Agramonte’s love for his wife, Amalia Simoni, his actions as head of the Cuban cavalry and his deeds during the war.

Young actors Daniel Romero and Claudia Tomás play Ignacio and Amalia, a cast that also includes American actors Michael Redford as Brigadier Henry Reeve (El Inglesito), who fought under Agramonte’s command, and Jonathan Burton as General Thomas Jordan, at the time Chief of Staff of the Liberator Army during the Ten Years’ War.

Another attraction of the proposal will be the music of José María Vitier, a creator who has made history in Cuban cinema.

El Mayor is undoubtedly a long-awaited film in Cuba, where Agramonte is remembered as a symbol of the struggle for independence, a legendary figure, an example of the courage of those who gave their lives in the redemptive battle fields.