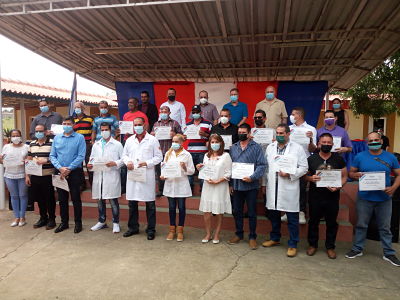 The altruistic vocation of Cuban medicine stands out in the current international context marked by Covid-19, due to the performance of its professionals on the island and in 58 other countries where they serve, said Raul Gonzalez, Cuban diplomat , on behalf of the state mission of the Island.

As he explained, the scourge of the pandemic and the tightening of the economic, financial and commercial blockade of the U.S. government also imposed difficult challenges to continue the execution of important economic and social investments.

In this regard, he recalled the vision of Fidel Castro, who categorized men and women in health and construction as members, indistinctly, of the armies of the white coats and helmets for their decisive contribution to socioeconomic development and the welfare of the people.

In the case of Angola, “a brother country with which we are united by history and the blood shed”, cooperation in both spheres is also praiseworthy, said González.

Soon, he remarked, we will celebrate 63 years of our victorious Revolution (January 1), after ending a year full of “sacrifices and dedication” because, in addition to Covid-19, we had to face the tightening of the blockade with 243 additional measures, imposed by the Donald Trump Administration and maintained by the current U.S. government.

The advisor also denounced the intensification of subversive plans and “the fierce political-media campaign” by the enemies of the revolution in his country.

But we remain “calm, attentive and confident”, because “in peace in the present and in the future, Cuba lives and will live”, as expressed recently by the president and first secretary of the Communist Party of Cuba, Miguel Díaz-Canel, he summarized.