Bolivia seeks to relaunch relations with Cuba and increase cooperatio 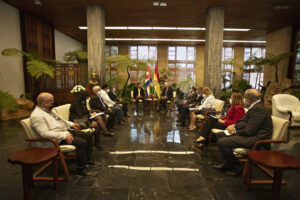 Bolivia seeks to relaunch relations with Cuba and increase cooperatio

According to the website of the Cuban Presidency, the head of state made these statements after his meeting yesterday with the island’s president, Miguel Díaz-Canel, in the capital’s Palace of the Revolution, as part of his official visit to the Caribbean nation.

In that exchange, the rulers reaffirmed the ties of friendship that unite both peoples, based on solidarity and mutual understanding.

“We are happy with the results,” Arce told national television, and also commented on the issues that both governments have proposed to work on, such as those associated with the pharmaceutical industry and biotechnology.

He also explained the willingness to continue developing programs that already existed, such as those related to education.

According to the president, Bolivia will contribute to improving the island’s agricultural production, something that, he assured, is already being worked on with great pleasure.

“We are relaunching our relations, after a period where Bolivia experienced a dictatorship, a coup d’état”, and now it has been “happily possible to make a face-to-face visit” to be able to resume a “new course of our relations,” he commented.

Arce assured that both parties will work together in international forums to make a common agenda, not only with Cuba, but also with the countries of the Bolivarian Alliance for the Peoples of Our America-Peoples’ Trade Agreement.

As part of the program, the South American dignitary paid tribute to the National Hero of Cuba, José Martí, and toured the Center for Genetic Engineering and Biotechnology, creator of the Abdala vaccine, the first developed in Latin America and the Caribbean against Covid-19.

He also spoke with Prime Minister of Cuba, Manuel Marrero, which made it possible to identify areas of cooperation, such as food production and sports exchanges, in order to advance for the benefit of both peoples.

The Bolivian president visited the National Capitol and spoke with the president of the National Assembly of People’s Power (parliament), Esteban Lazo.

Both agreed on the need to work together to consolidate the links between the respective legislative bodies.

Arce made an official visit to the Caribbean nation after participating the day before in the XX Summit of the Bolivarian Alliance for the Peoples of Our America-Peoples’ Trade Agreement.