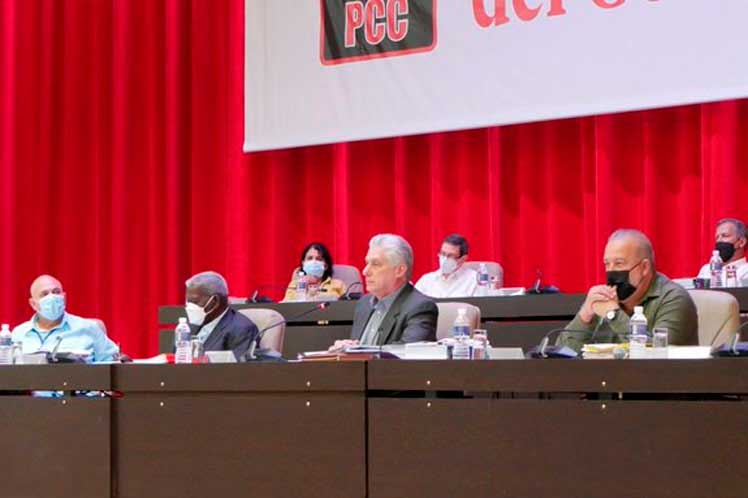 Speaking at the 3rd PCC Plenary Session, held at the Havana’s Convention Center, the Cuban president pointed out that despite being such a complex year, it was a period of victories.

“They shot to kill and they wanted us to disappear and we are alive. We do not let ourselves be overwhelmed, we resisted all the attacks and in a creative way,” he said according to the PCC’s Twitter account.

Diaz-Canel stressed that next year, the Party’s work will focus on following the 8th PCC Congress, held in April 2021, as a reference, and fulfilling its postulates, making them concrete.

On Thursday and Friday, the 3rd Plenary Session will analyze a proposal of actions to revitalize and update the work of the Committees for the Defense of the Revolution (the largest mass organization in the country), and the Cuban Women’s Federation.

All 113 members of the Central Committee will also discuss the proposed modifications to the organization’s regulations, as well as those related to the processes of admission, sanctions and deactivation.

In addition, participant will give their opinions on the proposed national program for the study, research and dissemination of the thought, life and work of the historic leader of the Cuban Revolution, Fidel Castro.

The secretary for the PCC Organization and Politics, Roberto Morales Ojeda, presented the main report of the meeting, which contains references to the exercise of the Political Bureau since the previous Plenary, held last October.

This meeting emphasized the improvement of the organization’s work, its link with the people’s power and workers, the permanent exchange of party members with the people, and the advancement of measures for the socialist state enterprise and other actors.

“The Party continued working on complying with the agreements from the 8th Congress with the premise that the PCC is increasingly democratic and participatory, ensuring the ideological work and the economic battle,” Morales Ojeda noted.