Panamanian newspaper shows Cuba’s condemnations of abuses in US base 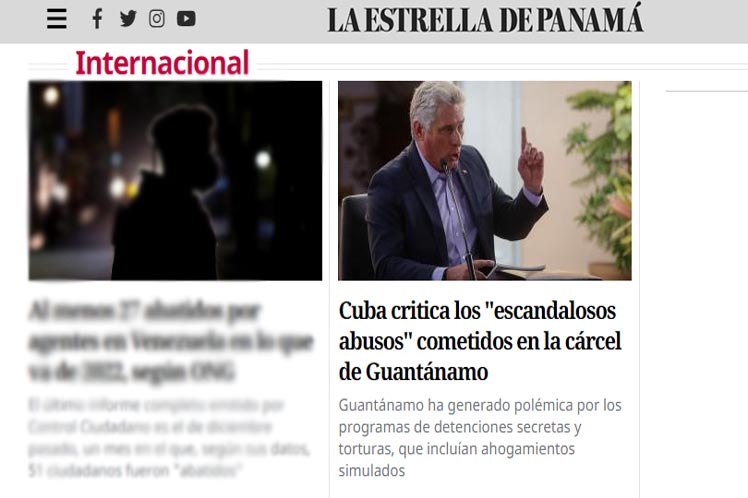 Panamanian newspaper shows Cuba’s condemnations of abuses in US base

The newspaper quoted messages from the Cuban president on Twitter, in which he assured that these abuses have been committed in the prison camp opened by then US President George W. Bush (2001-2009), after the September 11 attacks in New York.

Along these lines, the newspaper also published tweets by Cuban Foreign Minister Bruno Rodriguez who asserted that the US naval base in Guantanamo (eastern Cuba) harbors a 20-year history of ignominy.

Rodriguez said that there have been “780 people arbitrarily detained, without a trial or due process, including minors. Not a few of them victims of torture and degrading treatment that violates human rights,” according to La Estrella de Panama, which noted that the site has generated controversy over the secret detention and torture programs, which included simulated drownings and techniques to prevent prisoners from sleeping.

Tuesday marks two decades since the arrival of the first prisoners to the prison camp established by the US Government in that military base, which Washington maintains in eastern Cuba despite the constant demands from Cuban authorities for their return.

On Monday, UN human rights experts condemned the abuses committed in that prison.

In a statement, the group of UN independent rapporteurs pointed out that in that compound, relentless and continuous violations of the fundamental guarantees of the detainees are committed, which constitute a stain for the US Government on issues such as the rule of law.

The rapporteurs rejected the arbitrary detentions without trial and the torture or ill-treatment perpetrated in that center.

These are “unacceptable” practices for any government, but particularly for that of the United States which claims to be a protector of human rights, they stressed.