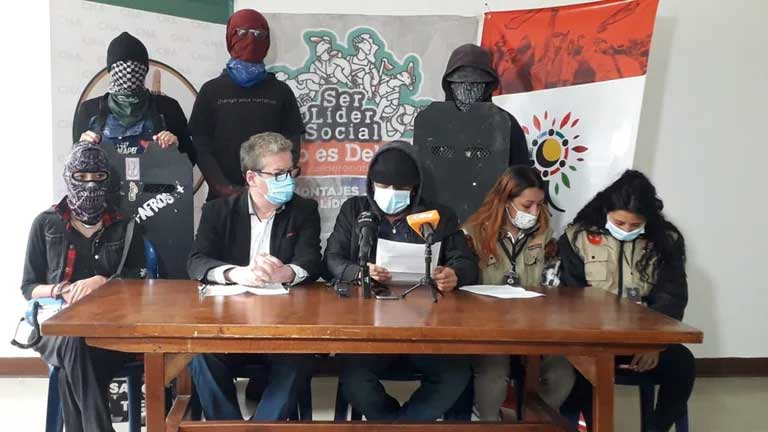 According to Noticias Uno, the Colombian demonstrators recently talked in a virtual meeting open to all Internet users, with young people from Chile about the demonstration in the subway of the capital of that country after the increase in the prices of that transportation system, which originated the social outburst.

The newspaper pointed out that everybody, including the military and police intelligence, had access to this dialogue between Colombians and Chileans “that is why they do not understand how their event is interpreted as an international conspiracy”.

Noticias Uno pointed out that such virtual meeting ended up being the argument for the minister to accuse the young activists of international terrorist conspiracy to allegedly ally with Chileans and destroy vehicles and public transportation stations in Bogota and Santiago de Chile.

The young people of the so-called Escudos Azules group that decided to unite after the murder of Dilan Cruz occurred on November 23, 2019 at the hands of the agent of the Mobile Anti-Riot Squad (Esmad) in Bogota, rejected such accusations.

“We do not understand how communicating ideas of change and mobilizing with love and art the Colombian people to defend their dignity, is seen as a violent action that requires a machination or orchestration by international cells seeking to destabilize governments,” expressed a young man.

The minister’s statements “seem to be the antecedent of a judicialization of the young people of Escudos Azules who also invited the users not to pay the fares the day that the increase of its price was announced in Colombia”, emphasized the journalistic work.

The protesters rejected Molano’s statements and assured that they are nothing more than evidence of a worn out and systematic strategy in the face of his “front lines” exercise, who nevertheless announced more arrests.

The objective of this youth group was to defend protesters and repel attacks and violence by the Esmad during the anti-government protests in Colombia at the end of 2019, in 2020 and 2021.