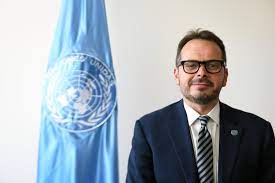 United Nations, Jan 20 (Prensa Latina) The persistent violence in priority areas for the implementation of the Peace Agreement in Colombia is of great concern to the UN, special representative of the secretary general for that country, Carlos Ruiz Massieu, highlighted today.

In his intervention before the United Nations Security Council, the high representative also pointed out that he urgently needs to focus on the threats that ex-combatants continue to face.

Although I recognize that the number of murders decreased compared to the previous year, each death is a blow to peace and everything must be done to protect them, he stressed.

“The spirit of the Final Peace Agreement is precisely that there can be no justification for violence in Colombia today, nor any alternative to dialogue to resolve conflicts,” he said.

As highlighted by the UN Secretary General, António Guterres, the pact of five years ago has laid ever deeper roots and this period will be crucial for the parties and the Colombian society to redouble efforts and continue with that road map facing heal wounds from the conflict and overcome its causes, he considered.

Events such as the recent murder of Breiner Cucuñame, a minor indigenous environmentalist member of the indigenous guard of Cauca, should call for collective action to stop this senseless violence, denounced the United Nations special representative.

In addition, he reported that between yesterday and today there were new violent events in Arauca and Antioquia.

In this sense, Massieu condemned the actions of illegal armed actors against communities, civil institutions and the public force, and renewed the call to respect humanitarian principles.

He also recalled that next March, Colombians will vote for a Congress that will include, for the first time, representatives of the 16 special transitory constituencies for peace.

In his opinion, this is a historic opportunity, provided for in the Peace Agreement, which must be protected if democracy is to be expanded.

Colombia is showing the value of investing in peace, Massieu stressed and insisted on the need to address the multiple challenges that persist in terms of security and protection of former combatants, on the fifth anniversary of the signing of the Agreement. On repeated occasions, the United Nations has called for strengthening the presence of the State to curb violence in priority areas for the implementation of the Agreement and ensure the stability of the country.

For its part, the Government of Bogotá tries to promote a panorama of success in its implementation programs of the pact, despite numerous complaints and claims from citizens and political and social organizations.