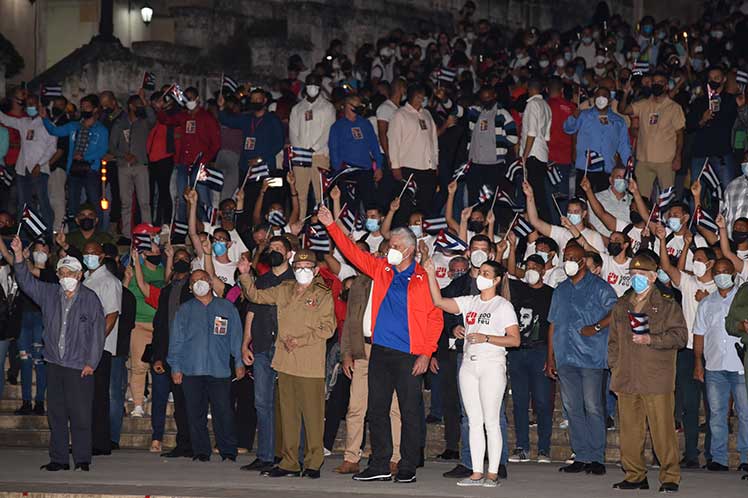 The first march of this type was led by young Fidel Castro as university student in pre-revolutionary Cuba in 1953 to remember the centenary of Marti’s birthday and condemned the crimes of Fulgencio Batista’s dictatorship (1952-1958).

Army General Raul Castro and Cuban President Miguel Díaz-Canel participated tonight in the traditional March of the Torches, as this tribute is called.

Together with the students and people of the capital, the walk departed from the steps of the University of Havana under the slogan “I carry my youth on fire, to the Forge of Martí,” the place where the Apostle was imprisoned for his libertarian ideas against the Spanish colonial rule when he was a teenager.

Before the pilgrimage, the national president of the Federation of University Students (FEU, in Spanish), Karla Santana, reaffirmed the commitment of young people to contribute to the work of the Revolution and to social transformation in order to strengthen socialist democracy.

The tribute to the most universal of Cubans is also expressed in social media with a tweet blitz under the tags #MartíVive, #Antorchas2022, #Revolucionando, #Cuba, #VamosConTodo and #60UJC.

This edition of the March of the Torches recalls the first pilgrimage, held at midnight on January 27, 1953, with the aim of awaiting the advent of the centenary of Martí’s birth.

That initiative also became an act of protest against the crimes of dictator Fulgencio Batista (1952-1959) and the persecution of young people who sought to change the political course of the island.