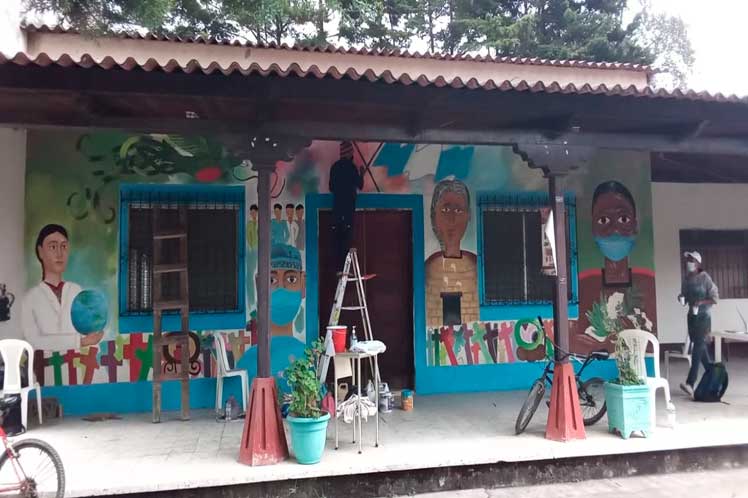 Community artists from San Juan Comalapa, Chimaltenango, and the Pueblo y Educación Popular group, together with Cuban doctors, staged a medical and mural day to pay tribute to the island’s medical brigades present in the country for 23 years.

They also recognized the health personnel who fight against Covid-19 and those who lost their lives due to the pandemic.

The doctors from the Caribbean nation arrived at the Kaslen hospital, where they treated 162 patients and also offered ophthalmological exams as part of Operation Miracle, a free program of cataract and pterygium operations.

Also, during the activity, the voices of supportive friends were raised against the economic, commercial and financial siege imposed by the Washington government, which every year ignores the majority vote of the nations to put an end to this interventionist policy.

This new mural is part of the San Juan Comalapa Arts Festival and was added to others placed in different villages of Chimaltenango with the end of the blockade of the island as the main theme.

“Today our conscience summons us again to demand the cessation of the genocidal blockade that damages the integrity of a sovereign country. From Kaqchikel territory we ask for solidarity among the peoples and bridges of love necessary for peace to prevail throughout the world, Viva Cuba, Bridges of Love, Blockade No”, was the message of the Guatemalan Nicolás López.

Leader of the People and Education Movement, López is very familiar with the solidarity of Cuba and its people, since he studied a Bachelor of Education at the José Martí Pedagogical School, in the eastern province of Camagüey, an experience that he now replicates with his group.

In this way, the land of the Quetzal joined the activities carried out today in Latin America, Europe, Asia and Africa against the blockade as part of the global initiative promoted from the United States by the Puentes de Amor project and the activist Carlos Lazo.