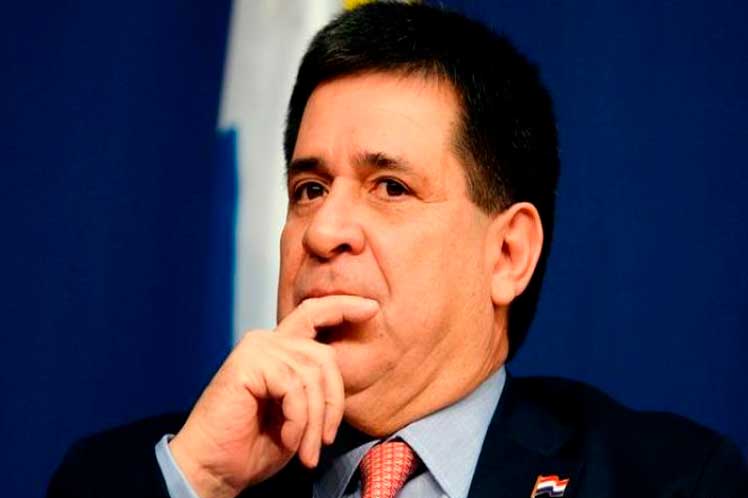 Asuncion, Feb 11 (Prensa Latina) The former president of Paraguay Horacio Cartes managed an offshore company in Panama during his term of office that he did not include in his sworn statements and the fact was hidden by the Prosecutor's Office, a local newspaper published today.
Share on facebook
Share on twitter
Share on whatsapp
Share on telegram
Share on email

Sandra Quiñónez, head of the Public Prosecutor’s Office, filed the complaint four months ago by the leader of the Authentic Radical Liberal Party, Efraín Alegre, about the false declaration of assets of the former president, added ABC.

She filed the accusation about Cartes’ portfolio company during the years of his mandate (2013-2018) with the Prosecutor’s Office on October 8, following the disclosure of the worldwide leak known as the “Pandora Papers”.

The prosecutors – according to the newspaper – did not prosecute the complaint of the liberal politician despite having evidence of the false declaration on assets and income delivered by the former president to the Comptroller General of the Republic.

Money laundering, usury, smuggling and drug trafficking are also other charges filed against the former president and other politicians

The scandal, whose antecedents date back several years, now erupted due to allegations before members of Congress by Interior Minister Arnaldo Giuzzio against the politician of the ruling Colorado Party.

Parliamentarians heard at that session on 3 February a report by Giuzzio on 26 January with charges against Cartes, backed by deputies, of money laundering, illicit enrichment and false declaration.

The new revelations included another complaint about the former president’s false sworn statement to the Secretariat for the Prevention of Money Laundering.

According to ABC Color, Cartes, whose wealth almost tripled during his term as president of the country, submitted four sworn statements that excluded the mentioned offshore company, called Dominicana Acquisition.

That firm was created on November 9, 2011, a year before Cartes won the internal elections of the Colorado Party in the run-up to the presidential elections, for which he already intended to run.

The then candidate admitted shares in 25 companies, among which the Panamanian company does not appear, nor other offshore companies later verified, among them a briefcase company registered in 1985 also in Panama, adds ABC Color.