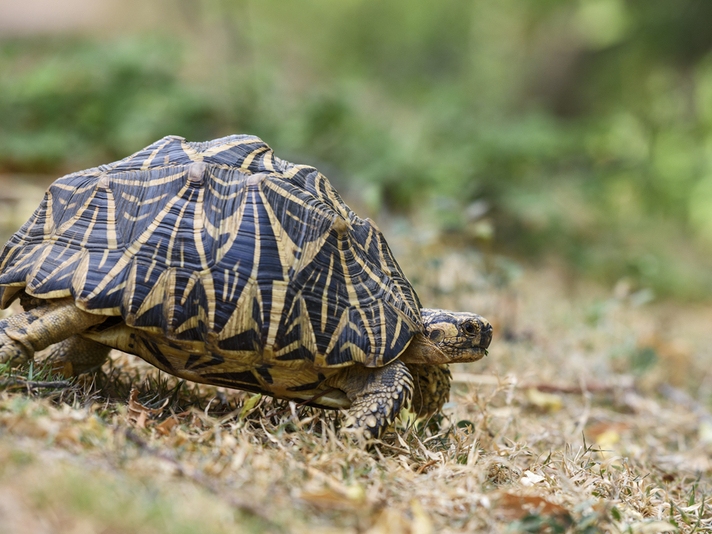 Regarded as one of the world’s most beautiful tortoises, Indian star tortoises are so named due to the yellow and black star-shaped patterns on their shells, The Third Pole portal reported.

Stuffed into suitcases, bundled into shopping bags and trapped in cool boxes: every year, thousands of Indian star tortoises are forced to endure horrific conditions as they are trafficked from their native India and Sri Lanka.

They are found only in parts of India, Pakistan and Sri Lanka, where they inhabit dry grasslands and scrub.

They’re attractive, easy to care for and have a long lifespan, Jose Louies, joint director of the wildlife conservation charity Wildlife Trust of India, told The Third Pole.

In India, data collated by the non-profit the Wildlife Protection Society of India and shared with The Third Pole shows that authorities seized 3,500 star tortoises in 24 incidents across 2020 and 2021 – after the CITES ban came into effect.

In 2022 so far, there have been two reported seizures in the country, involving a total of 1,498 star tortoises.

Given that only a small proportion of smuggling attempts are likely intercepted by authorities, the true number of tortoises in ongoing illegal trade is likely far higher.

Their journey usually begins, according to Louies who has worked undercover identifying star tortoise trade routes, with a local person spotting the tortoise in the wild and passing it on to a collector in exchange for a small finder’s fee. It is then given to an exporter who packs numerous tortoises together, hiding them in vegetable cartons, suitcases, or cargo. Tape is wrapped around the star tortoises’ legs to limit movement before they are flown out of the country, most often to a destination in Southeast Asia.

In India, where the star tortoise is protected under Schedule IV of the Wildlife (Protection) Act 1972, anyone found in possession of the species could face criminal charges, with sentences of up to six months’ imprisonment. But in reality, the punishment is likely to be only a small fine and a shorter jail sentence, even for those who are known to be seasoned smugglers, Louies said.

The lack of clear punishment for illegal trade of the star tortoise means there isn’t enough of a deterrent for traders, according to Louies.