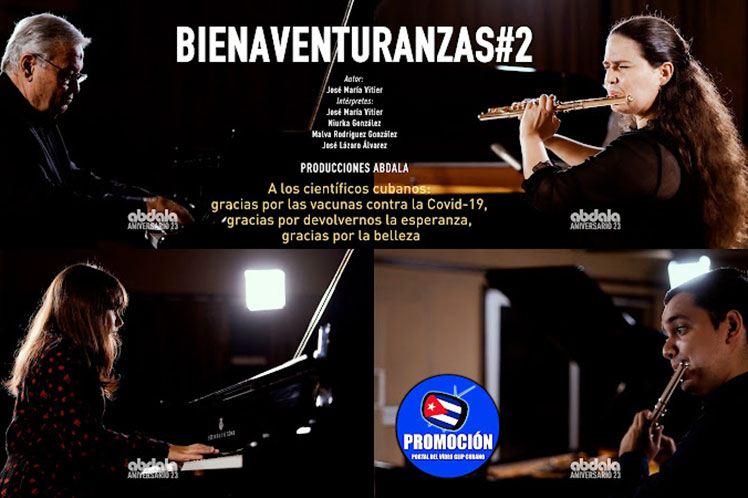 The phonogram made up of 21 compositions, proposes “from its eclecticism and variety, converging expressive alternatives in the same participatory look and convoking of hope”, according to the introductory words, dedicated to González’s interpretative capacity.

Created under Abdala Unicorn Productions label, the plate invites in each piece to search for beauty, especially in times marked by physical distances and lack of certainty about tomorrow, which forces art to “break discouragement” and look for essences governed by another tempo.

At a press conference, Vitier evoked the biblical conceptualization of the Beatitudes, conceived as that prayer that arises in the midst of crisis, in difficult times, to bring faith and trust in the advent of better times.

In that sense, he highlighted the album was born from a series of musical sentences published from his profile on Facebook social network, which without prior planning, gave rise to the compositions of the album, and to all the articulation of artistic expressions originated by it: painting, design and documentary.

On her part, González valued the experience as exceptional, which required a high degree of preparation, hours of rehearsal and teamwork to achieve the perfect coupling, combined with the mood of each song.

The audiovisual material produced during the rehearsal and recording process was in charge of filmmaker Lester Hamlet, who included interviews with the project’s protagonists and other special moments.

The first opportunity to listen live to a selection of the plaque will be next February 27 at the Martí Theater in this capital, in a concert that will bring the pieces closer together, but on that occasion together with soprano Bárbara Llanes, instrumentalists of percussion and bass of the Havana Chamber Orchestra.